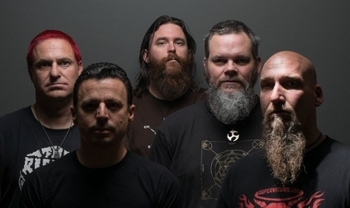 The band's lineup as of 2019.
Advertisement:

Neurosis is a post-metal band from Oakland, California. Initially playing crossover thrash, they pioneered a mix of hardcore punk, Doom Metal, and Post-Rock that became known as post-metal, and have become one of this subgenre's most acclaimed acts. Their songs tend to be extremely long and often contain screamed vocals, with lengthy instrumental passages that often build in intensity to an explosive climax. Many other bands in the subgenre have cited them as an influence.