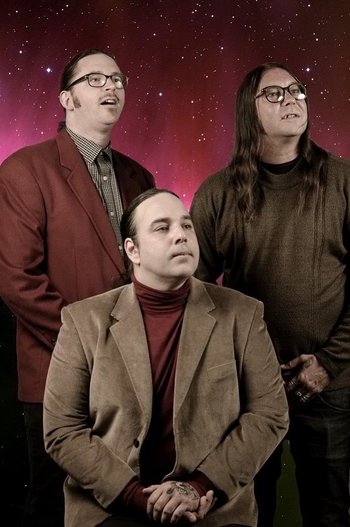 Sleep is a seminal stoner metal band from San Jose, California. Formed in the early 1990's from the ashes of the band Asbestosdeath, Sleep was a three piece consisting of bassist Al Cisneros, guitarist Matt Pike, and drummer Chris Hakius. During their original run, they only recorded three albums before conflicts with their record label forced them to split up, but all three records are now regarded as classics. The band was known for their incredibly loud, slow, and heavy sound, influenced by the likes of Black Sabbath and Saint Vitus, as well as a penchant for Epic Rocking, which was taken to an extreme on their third album Dopesmoker, which was a single, hour-long song. After the band broke up, the members went their separate ways to start new projects which each attained a great deal of success in their own right. Matt Pike started the sludge metal band High on Fire (which is like Sleep but faster) while Al Cisneros and Chris Hakius started the drone project Om (which is like Sleep but slower). In 2009, the band reunited with Jason Roeder of Neurosis on drums (Hakius having retired from music in the intervening time). They've performed live at various festivals since, and have recorded a new single, "The Clarity", to great acclaim. On April 19, 2018, they announced a new album, The Sciences, to be released the very next day (4/20, a day long associated with marijuana use). Although a surprise release, it received critical acclaim from music critics continuing the band's critical success that follows that of Holy Mountain and Dopesmoker. The following month, they released another non-album single, "Leagues Beneath". The band announced that they are going on hiatus following their New Year's Eve 2019 shows, but are not breaking up.

Tropes that apply to Sleep: