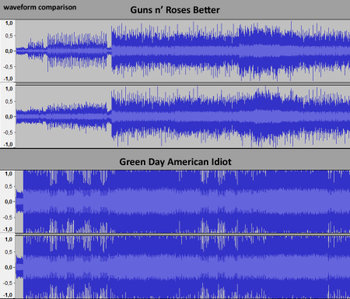 Top: Dynamic range. Bottom: Dynamic pain.note Chinese Democracy was actually released four years after American Idiot, but the engineer apparently knew what he was doing.
"I like my music like I like my life — everything louder than everything else."
— Meat Loaf
Advertisement:

Ever since the dawn of humanity, it's been a known fact that people respond more easily to louder audio stimuli. Thus the illusion that "LOUDER = BETTER". With the advent of music recording technology, the music industry sought to capitalize on this; if our album is louder than their album, and the listeners don't adjust their volume dials to compensate (or can't, if they're hearing it in a bar, a gramophone with no volume dial, etc.), our album will sound better! However, vinyl records suffer from physical limitationsnote for example, too much bass can bump the needle out of place, and too much high end can destroy the printing needle when creating a record! that necessarily constrain the physical (and perceived) loudness of a record. The search for loudness became easier with the introduction of the compact disc in 1982; now working with a digital storage medium, sound engineers found themselves liberated from the former physical constraints on perceived loudness.

Any recording medium has an absolute limit when it comes to amplitude, and compact discs are no exception. Once audio engineers managed to max out, the only solution to go even more Up to Eleven and out-loud those other CDs was to break out the dynamic range compression

, which squashes every bit up to the same volume level, causing listener fatigue

.note In addition to dynamic range compression, sound engineers can use overdrive distortion (or outright digital clipping) to further increase the average amplitude of a track. Another trick is to increase the "perceived loudness" of a track by emphasizing frequency ranges the human ear is more sensitive to (highs and high-mids) and de-emphasizing others (very low sub bass and sometimes mids). The often-used analogy here is that of attempting to read a text written entirely in capitals in a huge font. In movies, Orange/Blue Contrast has a similar effect; since the contrast is pleasing to the eye, producers will push at as far as possible, often over-saturating the film in these colours and squashing out more subtle colours entirely.

Compression is not inherently bad. In fact, it is an essential part of the sound engineer's toolkit, used to level out the inconsistent volume in a track.note This is practically guaranteed to happen when recording live material. Especially bass guitars. Furthermore, it can be used creatively to manipulate the sound of a single instrumentnote especially drums, where compression is often used to emphasize the body or tail of a strike or even a full mix, "gluing" the tracks together. However, if used ineptly, it can result in unpleasant changes like undesired pumping, outright distortion, or a more abstract loss of "life" or "impact".

It may be worth noting that, due to the general trend of increasing loudness of commercial releases over time, a release that would have qualified as an example of this trope in 1995 would not necessarily qualify as an example of this trope in 2005 or 2015 (unless it's by Oasis). Similarly, an album that would qualify as an aversion of this trope now would not have qualified as an aversion in 1995. An album that comes out to DR8 generally qualifies as good mastering by today's standards, but would not have been two decades ago. When looking at examples of this trope, it's probably worth noting that they're graded on a curve, so to speak.

Note that this is a separate issue from the loudness or intensity of music by genre. When loud music is used as a weapon, that's Loud of War. Not to be confused with Lodoss War. Note that this trope is not named for the band that did the soundtrack to Mazinkaiser SKL.