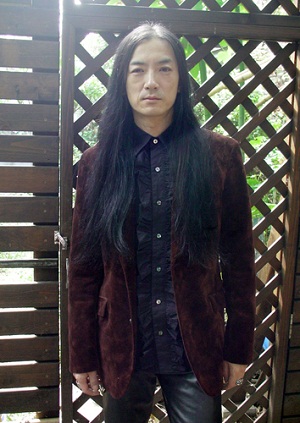 Masami Akita (born December 19, 1956), better known as Merzbow, is a Japanese Electronic Music artist and composer, as well as a book writer and editor for various publications.

During his youth, he listened to psychedelic rock, progressive rock and free jazz, all of which influenced his musical style. He has been the drummer for various rock bands during his high school years, but began his musical career as an experimental rock artist with his high school friend Kiyoshi Mizutani.

He later attended Tamagawa University to study fine art, at which he majored in painting and art theory. During this time, he developed an interest in Dada, Postmodernism and surrealism, eventually learning about Kurt Schwitters' Merz, or art made from rubbish, including the installation "Merzbau", which became the source of his stage name.

Merzbow began in 1979 as a duo consisting of Masami Akita and Kiyoshi Mizutani, initially playing Industrial music, which was not well-recognized during their time. They began garnering recognition in The '80s with their record label, Lowest Music and Arts, as well as its Spiritual Successor, ZSF Produkt, which released material produced by other industrial artists. During this era, the duo began producing recordings for various international labels. Merzbow performed in the USSR in 1988, and have toured the US, Korea, and Europe in The '90s. In 1989, however, Kiyoshi left to pursue a solo career.

As of the present time, Merzbow has released over 350 studio recordings. He also has loads and loads of aliases and side projects.

Merzbow's music is a matter of debate among Electronic Music fans, owing to its highly experimental and abstract nature. He is frequently cited as an early pioneer of Industrial music in The '80s, alongside acts such as Throbbing Gristle and Whitehouse. Due to this, he has gained substantial attention in underground Electronic Music circles, with many indies acts drawing inspiration from his works. However, he has also made forays into ambient-ish music and musique concrete. It is also arguable that he had a role in establishing/influencing the intelligent dance music (IDM) genre when it was still an Unbuilt Trope, before artists like Autechre and Aphex Twin entered the spotlight.

Despite being highly acclaimed in many musical circles, Merzbow's music is definitely NOT for everyone; much of his work is extremely harsh, dissonant, mechanical and rough-sounding, and often employs every form of musical Sensory Abuse imaginable, including, but not limited to: heavily distorted, chattering electronics, tape loops, an emphasis on both heavy, sub-sonic bass and piercing ultrasonics, and extensive use of reverb, feedback, and static, which is even made more harsh and sonically abusive through his rough production stylenote Remember this as you keep reading, however; you're in for a big surprise. His music comes across as overwhelming and difficult to listen to, and to the uninititated, may come across as sounding like a massive wall of black noise.

. Just pray that your eardrums won't get blown off in the process.