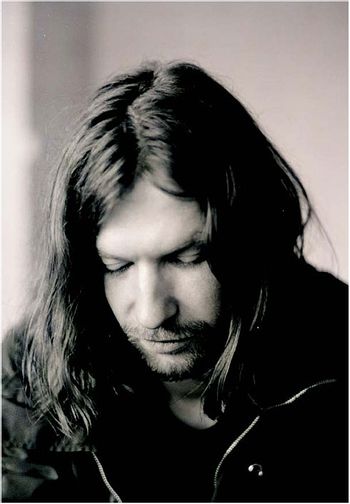 Influences:Influenced:
"I'm just some irritating, lying, ginger kid from Cornwall who should have been locked up in some youth detention centre. I just managed to escape and blag it into music."
Advertisement:

Richard David James (born 18 August 1971), better known as Aphex Twin (amongst other stage names), is an Irish-born English electronic musician, as well as the founder of the now-defunct Rephlex Records label. He was raised and spent much of his career based in Cornwall, England but currently resides in Glasgow, Scotland.

James is highly known and respected for his innovations in the world of electronic music and the sheer volume and versatility of his output, to the point where he's often regarded as one of the most influential artists of the umbrella genre's modern era, if not the most. His experimentation with sounds and visuals has built a surreal style that is truly his own, and his individual persona — eccentric and reclusive, with any information about his personal life muddled up with lies he tells For the Lulz — is arguably just as weird.

James started making music at the age of 11 by tinkering with one of his home computers, and hasn't looked back since. After some years of false starts, his first album Selected Ambient Works 85-92 was released on 1992 (a year after he started Rephlex Records) to overwhelming critical praise, setting him on the path to widespread recognition. Retrospective consensus deemed the album's success a watershed moment for the transition of electronic music to the mainstream, and the album itself an effective blueprint for the whole braindance note  More colloquially referred to as "intelligent dance music" or "IDM"; James prefers the "braindance" label since he thinks "intelligent dance music" comes off as elitist. movement.

While James is known in some ways as a Trope Maker for ambient techno thanks to the aforementioned SAW 85-92, his material is very diverse, ranging between pure ambient (SAW Vol. II), sad and beautiful Lonely Piano Pieces (most of them on Drukqs), ear-splitting drum 'n' bass (...I Care Because You Do, the Come to Daddy EP, some songs in Drukqs), acid techno (his early AFX/Caustic Window material, plus the Analord 12" series) and his trademark combination of upbeat melodies with complicated beats (Richard D. James Album, Drukqs). His 2014 album Syro (his first full-length release in 13 years!) falls somewhere in between the last two styles, respectively.

Oddly enough, out of two of his best-known mainstream hits (those would be "Come to Daddy" and "Windowlicker"), the former has experienced Creator Backlash and the latter is a Black Sheep Hit.

As of 2017, James has put up a personal Bleep store

with which he aims to rerelease all of his past discography on Warp, including various new bonus tracks within the releases in the process.

that are strictly for promotional purposes. The closest thing he has to a regular public profile at the moment is his personal SoundCloud

, where he notably uploaded hundreds of demos and unreleased tracks completely anonymously in the mid-2010s. He still updates the profile occasionally to this day, even conversing with fans in comment sections.

You can now vote for your favourite Aphex release HERE!

open/close all folders
Under Aphex Twin

COME ON YOU CUNT, LET'S HAVE SOME APHEX ACID!