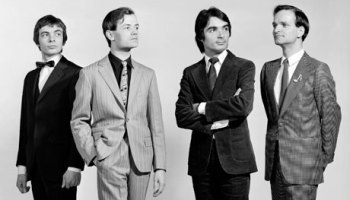 The classic lineup, from left to right: Karl Bartos, Ralf Hütter, Wolfgang Flür, and Will Forte... Er, sorry, Florian Schneider.
"She's a model and she's looking good,
I'd like to take her home that's understood,
She plays hard to get, she smiles from time to time,
It only takes a camera to change her mind."
— "The Model"
Advertisement:

Kraftwerk is a German electronic group based in Düsseldorf, Germany, noted for such songs as "Autobahn", "Trans-Europe Express", "The Model", "The Robots", and "Computer Love". Founded by Ralf Hütter and Florian Schneider in 1970 and originating in the highly experimental rock scene of 1970s West Germany, they were practically the Trope Makers of Electronic Music in general, being among the very first groups to begin experimenting making music entirely electronically, starting in the early 70s. Their output from then until the dawn of the 80s is usually considered pretty ahead of its time.

The band are generally treated as electronic music's equivalent of The Beatles. They're directly responsible for the existence of modern electronic dance music, from Techno, Industrial and EBM to Synth-Pop and even early Hip-Hop (and that just scratches the surface). Their 1974 song, "Autobahn" - designed to replicate the sounds of driving the titular highway - was famously cut from a whopping 23 minutes to less than 4 for radio play, and became a surprise hit, reaching the top 40 in America and the UK, amongst other countries.

Their songs mainly have to do with technology ("Kraftwerk" is German for "Power Plant"). Their gimmick was that they were robots; Kraftwerk would often act stoic-like and utilized robotic replicas of themselves for some promotional appearances. The robots became less and less human-like over the years.

The band's classic line-up, after Hütter and Schneider, included Wolfgang Flür and Karl Bartos. Flür left the group in 1987, Bartos did the same in 1990, and Schneider departed in 2008. On May 6, 2020, it was announced that Schneider passed away of cancer not long after his 73rd birthday.

Despite their enormous influence - it's been said that you could walk into any nightclub and likely hear traces of Kraftwerk - they spent years struggling to get enough votes to be inducted into the Rock & Roll Hall of Fame. They finally admitted Kraftwerk in 2021, as an early influencer.

Tropes exemplified by Kraftwerk and their songs:

We are The Robots

From Kraftwerk song The Robots in their The Man Machine album.

We are The Robots

From Kraftwerk song The Robots in their The Man Machine album.