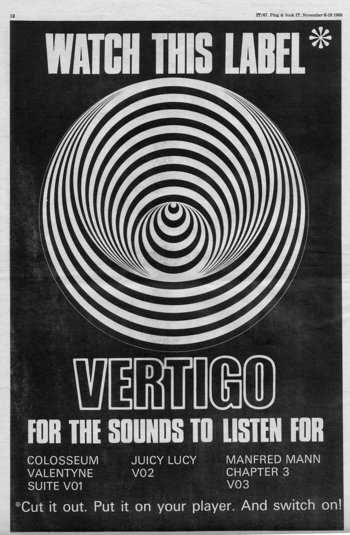 An ad announcing Vertigo's first releases. Note the text asking readers to put the logo on their record players and observe the spinning effect.
"I was sitting in traffic, it was raining; my car windows were steamy and I wanted to look at something in shop window across the street. I drew an increasingly large circle, like a spiral, in the fog of the auto glass. That was the starting point for 'swirl' label that we developed with the input of our in-house art team, Linda Glover and Mike Stanford- the whole point was to draw you in, and combined with the label name I conceived- 'Vertigo'- it captured the sense I wanted to create- a sort of hypnotic quality. It was also visually a lot more interesting than bare typeface of the standard label logo and copy on virtually every other record. I wanted this to function as 'art', and couldn’t have done it without Linda and Mike."
—Olav Wyper discusses the origin of Vertigo, from this interview

It was the end of The '60s. Rock & Roll had turned into Rock, and the British record industry responded with several new labels dedicated to the "underground" genres that the counterculture listened to, such as Psychedelic Rock, Progressive Rock, Hard Rock and Folk Rock. Some were independents like Island, Charisma, and Chrysalis, while others were major label imprints like Decca's Deram and EMI's Harvest. Olav Wyper of Philips Records wanted his company to enter this lucrative market, so he spearheaded the formation of Philips' own "hippie label", Vertigo, which was launched in November 1969.

Many Vertigo signings were cult heroes or commercial non-starters who are remembered only by collectors, but several of their performers did well, with some even gaining iconic status. Manfred Mann switched from pop music to Jazz and Space Rock with his new band, Chapter Three. Gentle Giant gained a cult following for their complex prog rock. Rod Stewart put out his first two solo albums on Vertigo before switching to its corporate stablemate Mercury Records. The hard rock of Uriah Heep and Status Quo sold consistently. Kraftwerk managed an unlikely American hit single with its synth-driven Kraut Rock on Autobahn. American Singer-Songwriter Jim Croce licensed his recordings to Vertigo in Europe. However, Vertigo's most popular and influential act was Black Sabbath, who helped forge the destiny of Heavy Metal for decades to come.

Another notable aspect of Vertigo is the emphasis that the label, which billed itself as "The Sight and Sound of Contemporary Music", put on eye-catching graphics and packaging. Vertigo's logo, designed by Philips art directors Linda Glover and Mike Stanford (and possibly influenced by the work of Italian Pop Art creator Marina Apollonio), has come to be known as the "Vertigo swirl"; it's a series of concentric black and white circles that originally took up the entirety of a record's A side label, creating a hypnotic spinning effect as the record played. (All the credits and info appeared on the B side.) Most Vertigo albums from the classic late 60s/early 70s era have gatefold covers, with a few even sporting elaborate die-cut or poster-sized sleeves.

As The '70s became The '80s, the music industry changed, with Punk Rock, New Wave Music and later Alternative Rock becoming the hip new genres; Vertigo failed to keep pace, although signings like Thin Lizzy and Dire Straits kept them on the charts. (The label's Canadian arm did manage to snag hip alternative artists like the Cocteau Twins and The Pixies through a licensing deal with 4AD Records and its corporate parent, Beggars Banquet.) By the mid-80s, the label had become the European home for Heavy Metal and Hair Metal bands like Def Leppard, KISS, Scorpions and Bon Jovi, with Metallica as its most prominent act. Since the Turn of the Millennium, Vertigo (now a part of Universal Music Group thanks to corporate mergers) has undergone a resurgence with new signings like The Killers, Soundgarden, and Dirty Pretty Things; even Black Sabbath, which had left Vertigo in 1987, returned for the band's final albums. Vertigo is also still active in Germany, having merged with Capitol Records.

Vertigo performers, past and present, with TV Tropes pages: