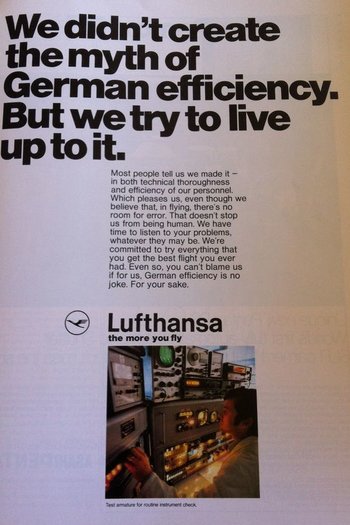 Lufthansa poster, 1973
"The ideal of creating a new man after the bloodletting of the trenches stemmed from the belief that this sort of war had produced a new type of individual [...] Amoral, cool, functional, and hardened, he could withstand the ultimate test of battle without his nerves cracking. [...] Matter-of-factness thus marked the new man, who replaced the romantic relics of a failed bourgeois age with the image of mechanical precision."
— Stephen G. Fritz, on the 1920s ideal of The New German Man note  Ideology and Motivation in the Wehrmacht on the Eastern Front: The View from Below, printed in the 60th (October 1996) edition of the Journal of Military History, pages 687-688
Advertisement:

Germans come in a wide variety of stereotypes. Brutal barbarians from the north, cold blooded Knights Templar, corrupt aristocrats, Those Wacky Nazis, and many more. But at the end of the day, there are only three German stereotypes: Scientists/Doctors, Soldiers, and Engineers. And they are almost always highly competent perfectionists.

Note that Germans never lose their nerves and know no remorse. They do their job, they do it exceptionally and they are perfectionistic workaholics (also vindicated by the low incidence of strikes); driven by achievement and performance, they seek perfection, and they don't stop until they have it. And when they have it, a little imperfection in their work and they drive themselves to fix that tiniest imperfection to be perfect. Emotions are not necessary. It's almost like a national badasstitute of some kind.

You won't find any German mooks outside of World War II. If there are any Germans in the Big Bad's employment, only the position of The Dragon or head scientist will be good enough for them. And if a work of fiction has a famous and important foreign scientist, expect him to be German as well, though this has become less frequent in The New '10s.

Interestingly, before the 1850s Germans were portrayed as being too lazy, stuffed with sausages, and sloshed with beer to be anything but utterly incompetent at everything. For the better part of six centuries the Holy Roman Empire had been the sick man of Europe. Of course, in the mid-late 19th century the Austro-Prussian War, Franco-Prussian War, and Germany's ascension as a major industrial power (thanks to state-sponsored education and state-owned corporations) began to change that.

The trope's creator was the Kingdom of Prussia. After the destruction of the Holy Roman Empire in the Napoleonic Wars, Prussia, under Otto von Bismarck (a savvy statesman who coined the cynical term Realpolitik) reunified all the Germanic states bar Austria under the Prussian banner. In doing so, they made the Prussian virtues

of self-discipline the hat of the new German state. Since the dominance of Prussia over the other German states, the older trope of Germanic Inefficiency has shifted over to Austrians and (to a lesser extent) the Dutch, partly because of the influence of Vrijstaat Amsterdam. However, Germany, appreciating both the culture of Bavarian and Prussia, is not a robotic sour "kraut" but closer to a Work Hard, Play Hard attitude.

The trope maker was the intellectual climate of Germany and Austria in the 1920s. There was a powerful emotional argument that both countries had lost the war because the German people had been too soft, weak, and 'intellectual': to survive and prosper in the cruel world in which they lived, the German people had to become ruthless, strong, and calculating. Germany had to stop being Das Land der Dichter und Denker (the land of poets and thinkers) and become the land of scientists and soldiers. When they came to power, the Nazis did all they could to make these hopes a reality.

Designed and manufactured by German engineers and companies, German technologies, especially machines and vehicles, are included in this trope: if the manufacturer's name ends with "AG"note "Aktiengesellschaft" = "joint-stock company", equivalent to an American "corporation" or British "plc" or "GmbH"note "Gesellschaft mit beschränkter Haftung" = "limited liability company", you can be damn sure it's going to be at least portrayed as really, really awesome.

Compare with Dichter and Denker, German Peculiarities, and Asian and Nerdy (especially the Japanese, a longtime ally, friend and fan of Germany). Contrast with Germanic Depressives and Fascist, but Inefficient.

Note that this trope (despite the name) is only about Germans from Germany. It is not about foreign-born Germans, descendents of Germans, speakers of Germanic languages such as English and Danish, or Germanic ethnicities such as the Anglo-Saxons and Dutch.

"Me? German precision? You (an American)? Windmill."

"Me? German precision? You (an American)? Windmill."