Manga / From Eroica with Love 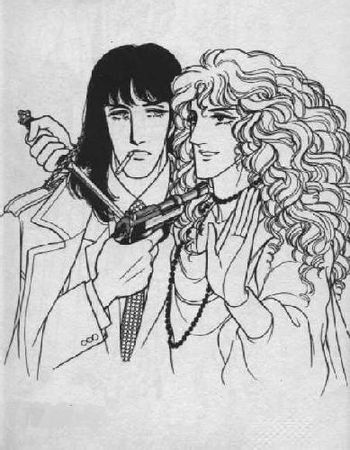 "I'm always searching all over the world for works of beauty to make them mine. And whatever I want, I get. It's my personal policy."
— Dorian
Advertisement:

From Eroica With Love is, as the title implies, a James Bond spoof. It's one of the longest running manga in Japanese history, running from 1976 to 2012 (though it changed magazines a few times and went on hiatus from 1989 to 1995). It stands out for never having been animated, despite being quite popular (the creator dislikes animation), and for using Comic-Book Time, despite being largely realistic.

The series begins in the Cold War Era, with the introduction of the flamboyantly gay art thief (and Robert Plant lookalike) Earl Dorian Red Gloria, also known as Eroica. Together with his hapless assistants (James, Bonham, and several others), he aspires to steal gorgeous art, wear gorgeous clothes and spout gorgeous poetry. Soon, however, he meets his match in the German Major "Iron" Klaus Heinz von dem Eberbach of NATO Intelligence, who swears to catch Eroica with the help of his terrified subordinates.

The chemistry between these two characters has kept the series going for over 30 years. Neither Klaus nor Dorian will let go of their target: Klaus, being practically asexual, stubbornly refuses to acknowledge Dorian's obsession with him, and Dorian, who sees Klaus as a "work of beauty" truly worth stealing, refuses to believe that Klaus doesn't want him.

Basically, it's Road Runner vs. Coyote set in Europe. And the roadrunner wants to screw the coyote.