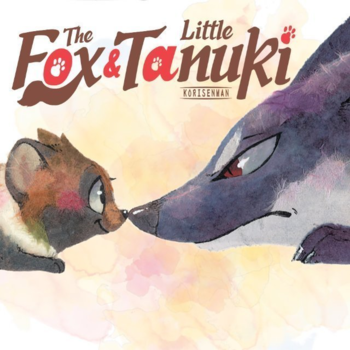 The Fox & Little Tanuki (Korisenman/こりせんまん in Japanese, lit. "Fox and Tanuki Ten Million") is a fantasy manga by Mi Tagawa. It began serialization in Monthly Comic Avarus in 2018, and is licensed in English by Tokyopop.

Long ago, the Kitsune Senzou, born with immense mystical power, wrought chaos throughout the land and feared little of the gods in the heavens above. For his transgressions he was ultimately imprisoned and sealed away by the Sun Goddess, laying dormant for centuries.

In the present day, Senzou is finally freed and becomes eager to seek vengeance for his imprisonment, but unbeknownst to him not only has the bulk of his power been sapped away over the years, the Sun Goddess has other plans in mind for him. In order to win back his strength, Senzou is charged with raising Manpachi, a Tanuki pup born with heightened magical abilities like himself, to become a servant of the gods. Now Senzou has no choice but to swallow his pride from the days of being the great & terrible fox spirit he once was, and learn the ropes to becoming a proper caregiver in order to escape his fate.