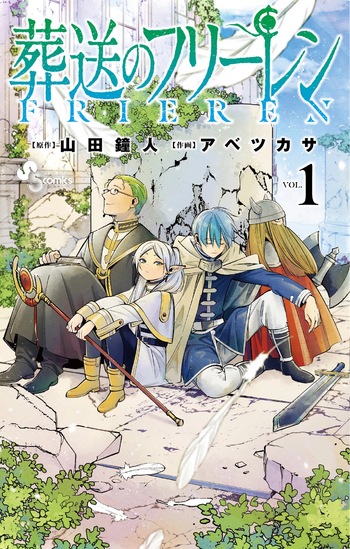 After a ten-years-long journey, a group of adventurers has managed to defeat the Demon King and has brought peace to the world. The group, consisting of the human hero Himmel, dwarven warrior Eisen, human priest Heiter, and elven mage Frieren, then return to the capital, where they are hailed as heroes.

Before they part ways, they watch the Era Meteors together, a meteor shower which only appears every fifty years, and Frieren promises to meet them again and show them a better view when the next shower appears. Frieren then departs and wanders the world to study magic.

Fifty years later, Frieren comes to the capital again, but unlike her, the world has changed and her former comrades have visibly aged. After one final adventure to see the meteor shower, Himmel passes away.

Regretting that she didn't spend more time with her friends, Frieren visits Heiter twenty years later. Heiter, who can feel his approaching death, has taken in a human girl, Fern. Before he dies, he leaves Fern in Frieren's care. Fern then becomes Frieren's apprentice, and together they wander the world to study magic and humanity.

Frieren: Beyond Journey's End (葬送のフリーレン, Sousou no Frieren or Frieren at the Funeral) is a manga written by Kanehito Yamada and illustrated by Tsukasa Abe, published in Shogakukan's Weekly Shounen Sunday since April 2020.

In February 2021, VIZ Media announced that they have licensed the manga and will start publishing it in the same year.