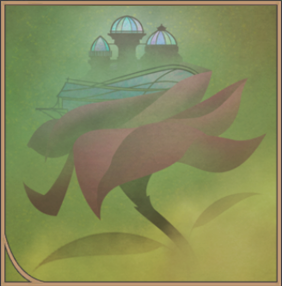 Yup, that is an entire town on the top.
Advertisement:

In Real Life, flowers rarely are bigger than a foot or so tall, and anything bigger is considered gigantic. However, in fiction, blossoms can be much larger and taller than that. Many reasons can explain the use of those behemothic flowers:

Note that normal-sized flowers that appear big because the protagonist are very puny aren't covered by this trope. Compare Fungus Humongous for its fungal equivalent, which is albeit less prone to be used to add a whimsical atmosphere. See also Fantastic Flora, which groups all the tropes about unusual plant life.