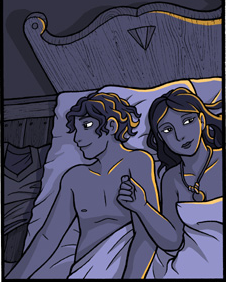 "Sexy women would 'happen' to be topless in the 1970s movies for no better reason than that everyone agreed, including themselves, that their breasts were a genuine pleasure to regard — the most beautiful naturally occurring shapes in nature, I believe. Now we see breasts only in serious films, for expressing reasons. There's been such a comeback for the strategically positioned bed sheet, you'd think we were back in the 1950s."
— Roger Ebert, reviewing

A character who is nude in bed uses the bedsheet to cover their private parts. They may be in the morning after a night of passion, or have been undressed and left resting in bed or even simply be sleeping in the buff. The nude character might get out of bed and drag along the sheet pulled from the bed to avoid exposing nudity to a sexual partner (or even an empty room) and, coincidentally, to the viewer. They may even wrap the sheet in such a way as to make a makeshift dress instead of putting on some clothes or a robe. A character that has found themselves without clothes for any reason may also make use of (or be given) some kind of bedsheet, blanket, or cloth for them to cover themselves with.

Another frequent variation is during sex scenes when a sheet is used to strategically cover the couple's nudity or any explicit sexual act while they're making love. In post-sex scenes, couples will often have the bedsheet draped over their bodies with the sheet usually falling low to the man's waist (exposing his bare chest) but having the woman's bust covered up. Apparently, L-shaped blankets, also known as the His 'n' Hers Bedsheet, are a fad in Fictionland. There's also a unisex bed sheet that also falls to the woman's waist that can: have her laying on her stomach so as to only expose her Toplessness from the Back, her laying on her back or stomach during a sex scene, exposing her Sideboob, or simply leaving her breasts uncovered. However, unisex bedsheets were fashionable in Fictionland throughout The '70s and early Eighties. Even media that freely show topless nudity will frequently have sex scenes that feature sheets tightly wrapped around the waists of the two actors simulating coitus.

Media that feature corpses for autopsies or surgeries (such as Police Procedural and Medical Dramas) also frequently have bedsheets draped over them to preserve their modesty or cover wounds. Sometimes the sheets will only cover the nudity while the gore of the body's wounds may still be in full display.

Done well, audiences won't even really notice. It's not unusual for people to have a sense of modesty, even when alone or with a lover. Or they may simply be cold. However, done poorly, it can be incredibly jarring and break viewers' suspension of disbelief.

While this is a censorship trope, it is also a Fanservice one, as the idea of a character wearing solely a bedsheet is titillating in and of itself. To the point Fanservice Models posing wearing only a bedsheet became a somewhat common modeling "attire" that features in many magazines and promotional material. A character who is The Tease may even invoke this In-Universe, as wearing only a sheet is a popular way to show your potential sexual partner one is Ready for Lovemaking. A character dressed in only a sheet is also a common way to make someone look Sex Dressed.

See Right Through His Pants for when characters are wearing pants or underwear in situations where you would expect them to be nude. See Bankruptcy Barrel, Hand-or-Object Underwear, Modesty Towel and Modesty Rags for other objects that can be used to preserve one's modesty. Compare Scenery Censor, Shoulders-Up Nudity or Toplessness from the Back for other ways of showing nudity without showing nudity.