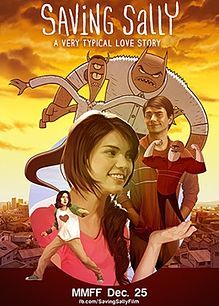 Saving Sally is a 2016 Philippine live-action/animated film. It revolves around Marty, an amateur comic artist who falls for Sally, a gadgeteer and inventor. The film served as an official entry for the 2016 Metro Manila Film Festival, which was notable for being dominated by indie and alternative features as opposed to the Christmas Rushed fare the Festival is known (and derided) for.