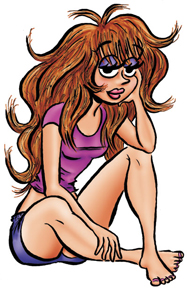 is a webcomic by R. C. Monroe. It focuses on the exploits of Miriam, a hedonistic, self-centered, self-destructive bartender with a good heart and a strong desire to change for the better—as long the change doesn’t interfere with her endless search for pleasure. Yes, she's a bit conflicted. Out There features an ensemble cast (Miriam’s various friends, lovers, ex-lovers, would-be lovers, etc.), some of whom are occasionally featured in their own arcs, but it’s mostly The Miriam Show, because she wouldn't have it any other way.

Using a four-panel (five in the early days), black-and-white Newspaper Comic format, Out There updated six days a week without fail from June 12, 2006 to June 4, 2011. The week of June 6-10, 2011 marked the beginning of a five week strip- the author citing time constraints and the inability to support himself solely on the strip as reasons why he cut the Saturday strip. As of June 2013, it's switched to one larger color strip per week, alternating with new comics In Here (an alternate continuity involving Miriam) and Cliché Flambé (Miriam and company Breaking the Fourth Wall to present author rants about a new cliché each week). As of March 2016 there are no new updates.

Out There is a "quiet" comedy; there's a punchline at the end of every strip, but the humor is generally subtle and understated. At its heart, Out There is a character drama, and its characters are well-developed, complex, and realistic.

Not to be confused with the IFC cartoon, Out There.

Sherry, knowing everyone who was given a hypothetical persona, figures it out