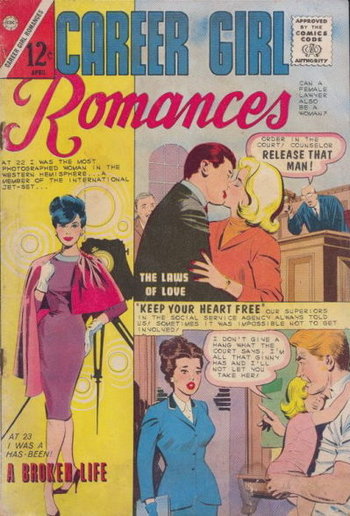 A Sister Trope to Family Versus Career, only before the kids show up.

Essentially, when a woman — and yes, it's almost Always Female — must choose between her own career and landing a man—and generally, she will choose the man. This often comes with the expectation that she would be a stay-at-home mom should the couple have children; but even if they don't, she might still be expected to be a happy housewife, cooking the bacon that her husband brings home.

A successful woman with a strong career, like the High-Powered Career Woman, can intimidate potential lovers, and a woman who prioritizes her career over her marriage will often be seen as either a Straw Feminist or a bitch. And even if she keeps her job, she might still be held responsible for all the cooking, cleaning, and other wifely tasks - after all, manly men just aren't good at that stuff.

An infamous Double Standard, since men are rarely put in this position. The extent to which this is Truth in Television varies by culture. In Asia, many women leave their jobs upon marriage, though in the west, women are often expected (or forced) to keep working to bring money into the household. Even so, there's often an attitude that her job is less important; if someone has to cut their hours to part-time or refuse a promotion, it's frequently assumed that it should be the wife. This can lead to a Self-Fulfilling Prophecy where employers are less likely to hire and promote women because they're assumed to be less likely to stick with the position, which leads to women being more likely to quit their jobs because they're making less money than their husbands are...