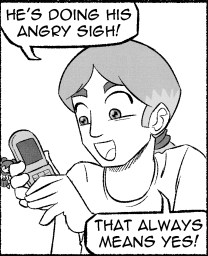 A Slice-of-Life Webcomic about the life of a girl who constantly butts heads with her excessively Japan-obsessed father as he opens an Anime inspired high school for her to attend. The comic is drawn by Ronnie Filyaw, Creator of Whomp!

Advertisement:
Jack: Can you at least cut it like Naruto's?
Advertisement:
Hana: I have scissors near your neck.
Miss Mayfield: Ah! I just wanted... I need you to sign... this half-eaten tuna sandwich.