Webcomic / The Other Grey Meat 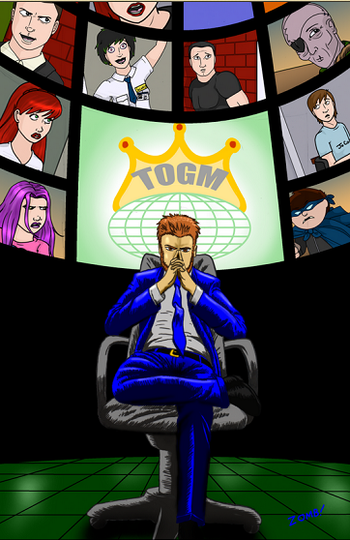 "There is good news, and bad news. The bad news is that you will never enjoy the sweet ecstacy of devouring brains. The good news is that if you are reading this, you are not a One, and that TOGM exists so that you wont starve to 'death'."
— So You're a Zombie Now - Title Page of the Flyer

(Not the first page of the comic, new readers can use this link

For years it has been common knowledge that every human is dead. No one is certain how it began, but the end is undeniable. Zombies have taken over the world. There are no pockets of resistance, no safe zone to reach and certainly no military to come in at the end of the day.

For John, who seems awfully human but with no memory of his past, there will be no easy way out.

But he is not without hope, because these zombies are different. As they killed, they regained intelligence, and have created an entire society around their own needs. Their efforts to regain their humanity has permitted the perfect disguise: A human pretending to be a zombie pretending to be a human.

If he can manage to keep himself from getting killed by Beth, the lovely Limb Replacement Technician who has taken him in, he just might be able to help them get to the bottom of this whole Zombie thing.

The Other Grey Meat is written by James Maillet and illustrated by June Maillet. The main link is currently here

but may change in the future.

The comic contains some inappropriate language, cartoon violence and provocative pose, but would probably be PG 13.