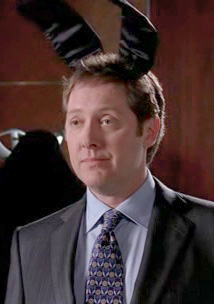 Alan Shore for the defense, your Honor.
"Well, obviously, Lionel Tribbey is a brilliant lawyer whom we cannot live without, or there would be very little reason not to put him in prison."
— President Bartlet, The West Wing
Advertisement:

Some characters have pervasive or extremely noticeable personality quirks, but remain steadily employed because they are just that good at what they do. Coworkers, superiors, and friends find themselves willing to overlook these informalities (e.g., a hypothetical highly successful lawyer who happens to wear fuzzy pink bunny ears during all his cases) so long as the job gets done. This is a cost/benefit ordeal: if they weren't so good at their job or their quirks were too obstructive, no employer would consider them a necessary sacrifice for sanity. In larger numbers, you'd have a case for a Ragtag Bunch of Misfits.

Much like the Ditzy Genius, it is a strange mixture of brilliant and bizarre. Their quirks don't seem to be intrinsic to success, a la Success Through Insanity, and the unexpected quirks only tend to bother new characters who don't know them well. Compare the Insufferable Genius, whose quirk is more often just being a Jerkass. The Insufferable Genius might insist everyone address him as "sir" or "Dr. Smith"; the Bunny-Ears Lawyer might not answer unless addressed as "Grand Duchess Abigail Chester Wilson Snapdragon Lemmywinks Brian Brain McFisticuffs the Negative 10 to the Fifth Power".

There are lots of Bunny-Ears Lawyers out there (we had to make subpages because of how many), mainly because having the character be an expert allows the writers to plausibly put them in any situation they want while the quirks make the characters interesting and unique. It is also a form of Wish-Fulfillment, especially in professional settings or societies that place a high value on conformity and "going by the book." There is some Truth in Television to this trope — Authorities in educational or professional environments will sometimes ignore quirks, especially if they don't have any relevance to the degree or job at hand. Although you're unlikely to see something as extreme as an actual bunny ears-wearing lawyer, you will find plenty of examples of people who remain employed despite their personal peculiarities.

A form of Ultimate Job Security. For situations where the strange guy is the one in charge (and uses their strange behavior to run their business) see The Wonka. Uniformed examples may overlap with the Military Maverick. Not to be confused with the Ambulance Chaser, though they may overlap in some cases. Compare the Indispensable Scoundrel, who is extremely competent but is shady and disliked as opposed to quirky. Contrast Consummate Professional, who will care about his behavior and appearance as much as his work discipline and skill.

Luckily, they're rarely Ax-Crazy. (Not never.) For an ultra manly-man who pulls off some girly hobby and nobody minds, take a refresher in the fact that Real Men Wear Pink.

Remember: In order for a character to qualify he must keep his job through sheer unquestionable competence. Sometimes you have incompetent characters that happen to be quirky and keep their jobs through means that have nothing to do with their competence. That is not this trope. If they are actually competent yet are seen as "renegade" due to their unusual behavior or philosophy and often are at risk of being fired (if they could find a legitimate way to get rid of you), you are looking at The Last DJnote The characteristics of a Last DJ that rub his colleagues the wrong way are usually more related to elements related to work ethic, such as integrity, authenticity, and avoiding the bureaucracy, politics, or social cliques of the workplace in question, not mere self indulgent quirks and eccentricities that may be widespread anyway amongst the workplace. . Also, in order to qualify, the character should have an unusual quirk or eccentricity, not just be slightly more informal than his colleagues. Finally, these quirks and eccentricities should, ideally, be a deliberate indulgence confidently relished by the the person in question, not merely due to Social Awkwardness, Ambiguous Disorder, or Single-Issue Psychology.

Not to be confused with Kangaroo Court. See also the Exotic Detective.