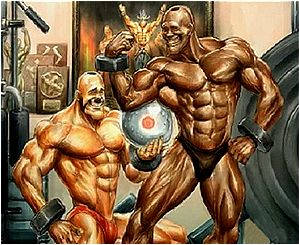 You, ordinary guy, are a sissy girl in their eyes.
"Every man ought to be a macho macho man
Have the kinda body always in demand"
— The Village People, "Macho Man"
Advertisement:

In most Western media, a man who is Camp Gay is usually of thin or average build. Not so here. Macho Camp is what you get when a campish character looks large and muscular, most often to bodybuilder level builds. Some are in the Transparent Closet, and vehemently deny their gayness, while others are quite open about it, and sometimes it's just never addressed, but one thing's for sure: it's really not something you want to tease them about. They do have muscles on muscles, after all.

Though the trope usually involves campy behavior, such characters are also often portrayed as being so overly manly that it becomes impossible to take seriously. These types tend to be prone to flexing and talking about how macho they are, all the while being a rather obvious gay stereotype.

This stereotype is somewhat more common in East Asian cultures (where it has become the default gay stereotype, as fashion-conscious pretty boys are more associated with heterosexuals there) than in the US, but is still seen in Western media (Ric Flair being a well-know example). Almost always Played for Laughs, such characters are often introduced to be Plucky Comic Relief, or to hit on the straight guy who can do little to stop it. In Japan, the stereotype has been named "Hard Gay".

While it's possible to be camp but not gay, combining this trope with Camp Straight is difficult to do in a way that doesn't just look like a straightforward case of Testosterone Poisoning or perhaps Real Men Wear Pink. And while there's nothing really stopping writers from creating bisexual or asexual Macho Camp characters, it's rather uncommon.

See also Camp Gay. Compare Leather Man. Contrast with Straight Gay. If a muscular-looking character is gay, but not a stereotype, then he's Manly Gay. If you're looking for works that are both campy and macho, see Testosterone Poisoning. May overlap with the Bara Genre in Japanese media.

A bit of 1st edition 40k lore about the Adeptus Custodes was taken to ridiculous extremes in TTS.

A bit of 1st edition 40k lore about the Adeptus Custodes was taken to ridiculous extremes in TTS.