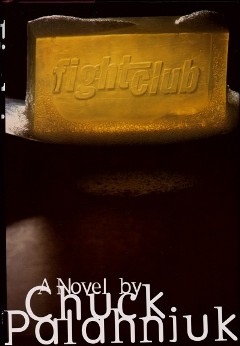 I am Joe's novel.
"People are always asking me if I know about Tyler Durden..."
—The Narrator
Advertisement:

Fight Club is a 1996 novel by Chuck Palahniuk. It revolves around an unnamed insomniac narrator who works a blue-collar job. The narrator becomes addicted to feigning illness at support groups for people with illnesses and conditions which he himself does not have in order to get himself to sleep, but eventually becomes obsessively plagued by an apathetic woman named Marla who he sees at various support groups, finally connecting with her at a support group for people with testicular cancer. The narrator eventually meets Tyler Durden, who starts a Fight Club where men alleviate their stress through fighting; as the club goes larger and its acts more heinous, the narrator is forced to confront Tyler, who reveals his true identity...

It was adapted into a movie starring Edward Norton, Brad Pitt and Helena Bonham Carter.

A graphic novel sequel was announced for a 2015 release.