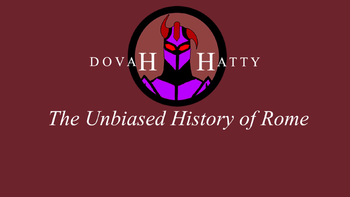 A channel not for learning history... but to indulge in the sheer madness of it
Advertisement:

Unbiased History is a web animation series by Dovahhatty on YouTube (and other platforms), which started with Rome on May 22, 2019. In spite of the name, it actually is blatantly biased towards particular factions for laughs, sometimes even reinterpreting entire events in their favor. The entire Rome series can be watched in chronological order here

, and Dovah is currently working on a mini-series

on the Byzantine Empire up to Heraclius' war with the Sassanids.

The Lord Thurn, seeking his revenge against Catholic conspirators, chucks the Catholic nobles out of the window.

The Lord Thurn, seeking his revenge against Catholic conspirators, chucks the Catholic nobles out of the window.