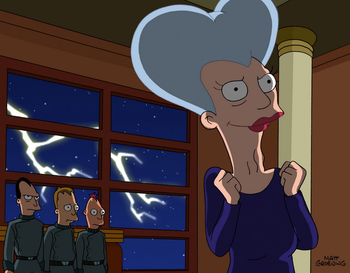 Evil definitely runs in this family.
"When Your Nemesis Is Your Mom: Fighting with your mom can be awkward. Will she know your weaknesses? If you win can you still go home for Thanksgiving? Just do your best in battle and remember that your mom will kill you if she gets the chance..."
— Does This Cape Make Me Look Fat? By Chelsea Cain and Marc Mohan
Advertisement:

A mother is one of the most central figures that a character can have growing up, and her influence can have an impact on that character even as an adult. If the character is lucky, that mother will be a loving one, and if he or she is really lucky, she'll be an Action Mom who can kick ass and take names if the character is ever threatened.

But if the character is really unlucky and isn't suffering from Parental Abandonment, the character's mother will be an Evil Matriarch and chances are, she will make that character's life a living hell.

Comedic: Usually used in the Dom Com, this variety is usually the mother of one of the two parents on the show who comes to visit every so often, and someone on the cast dreads it. Usually (though not always) this variety of Evil Matriarch is a meddling parent, often to an irrational extreme. Classically, this is a Mother-in-Law situation, but from time to time, the kids themselves, or even the child of the mother is the one that dreads it. In some cases, everyone hates the Evil Matriarch, like in Malcolm in the Middle where everyone dreads Lois's mother coming to visit. In other cases, her visit is appreciated by everyone but the daughter or son of the Evil Matriarch, like in Family Ties, where the matriarch is evil because her daughter feels she can't live up to mom's perfection. Expect this variety of Evil Matriarch to have Power Hair and other Fashionable Evil.

Dramatic: This variety, which shows up in more dramatic media, is truly evil in a traditional sense, and is one of the worst villains one can face, especially if one of the Heroes or Love Interests is one of her children (or if she's married into his or her family as a stepmother). Many such Evil Matriarchs are completely convinced that they, and only they, know what's best for their children, and can be very controlling, manipulative, and perfectly willing to do anything they deem necessary for their children's sake, no matter how evil or destructive it may be. The most vicious examples of this variety of Evil Matriarch despise their children (or at least the one they've singled out as The Unfavorite) and are often physically or emotionally abusive towards them, and many of them are not above Offing the Offspring.

If she's not entirely human, then expect her to be a Hive Queen. If she is also the Queen, expect God Save Us from the Queen!. If she is just a wanted criminal, then she's just a Notorious Parent.

The Spear Counterpart of this character type is Archnemesis Dad, and it's actually quite rare for an Evil Matriarch to be paired up with one. In the off-chance that she's indeed the wife of an Archnemesis Dad, their children are definitely screwed. The inversion is Antagonistic Offspring. See Abusive Parents and Parental Neglect for the more mundane versions. See Offing the Offspring and/or Matricide for what this might lead to if the kids fight back, or Hates Their Parent, for how the kid likely feels about them. Abusive Offspring is the inverse: whether the child is abusive to the mother.

If it's not your mother but her replacement who's making your life a living Hell, see Wicked Stepmother. If the evil mother in question actually has the word "mother" in her villain title, see One Bad Mother. Compare Villainous Mother-Son Duo, for when the mother and her offspring are active partners-in-crime.

Ragyo is Satsuki and Ryuko's mother and the main antagonist of Kill la Kill. She's also strong enough to outmatch both her daughters combined.

Ragyo is Satsuki and Ryuko's mother and the main antagonist of Kill la Kill. She's also strong enough to outmatch both her daughters combined.