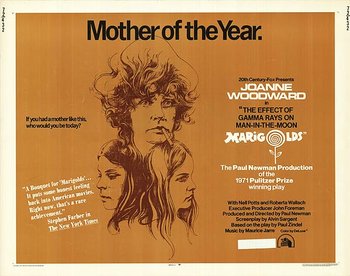 The Effect of Gamma Rays on Man-in-the-Moon Marigolds is a play by Paul Zindel, first produced in 1965.

It focuses on three members of the Hunsdorfer family: mother Beatrice and her daughters Tillie and Ruth. The Hunsdorfers live in what used to be Beatrice's father's vegetable shop, but the shop has been closed for years. Beatrice married young, a disastrous failed marriage that ended in divorce (later, her husband died by heart attack). Now the Hunsdorfers are scraping by in poverty, with apparently their only source of income being the $50 a week that Beatrice gets for boarding Nanny, a senile old woman. Beatrice is angry and bitter about her fate, hating the whole world, projecting that hate out onto her daughters. Ruth has epilepsy, and at some point in the past had a mental breakdown—a condition that runs in the family, apparently, given her mother's school nickname of "Betty the Loon". Younger sister Tillie is a bright high-school student with a talent for science, but her vicious mother, hating everyone who's better off in life than she is, seeks to crush Tillie's success.

A film adaptation was released in 1972, directed by Paul Newman, starring his wife Joanne Woodward as Beatrice.

Alternative Title(s): The Effect Of Gamma Rays On Man In The Moon Marigolds