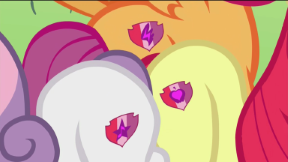 Cutie Mark Crusaders Forever!
"Well, what do you think, Crusaders? Were these cutie marks totally worth waiting for or what?"
— Apple Bloom
Written by Amy Keating Rogers
Advertisement:

Pipsqueak runs on a platform that focuses on getting the playground's equipment fixed after Twilight Sparkle's battle with Tirek destroyed it. Diamond Tiara interrupts, saying that the students should vote for her instead, because she can use her influence and money to build a statue of herself. It helps that Diamond Tiara's mother, Spoiled Rich, is on the school board. Silver Spoon tries to speak up, but Diamond Tiara quickly tells her she doesn't need any help. When the students start turning against her, Diamond Tiara tries to resort to blackmail and bribery to sway the election in her favor. None of it works; Pipsqueak wins the election in a landslide. Diamond Tiara is incredulous, but Silver Spoon tells her off and walks away. A frustrated Diamond Tiara screams in fury and storms off the school grounds. The Crusaders, worried about her, soon follow.

While in Ponyville, Diamond Tiara bumps into her mother, Spoiled Rich, who browbeats Diamond Tiara for losing the election to a "transplant" like Pipsqueak. As Spoiled Rich leaves, Diamond Tiara laments to herself that she feels alone, and that she's having trouble figuring out who she is after nothing seems to go right for her. As a token of friendship, the Crusaders invite her to their clubhouse, where Diamond Tiara sees the long list of things that the Crusaders have tried to earn their marks. She's actually somewhat impressed, since it means they can try to find their special talents their own way. Pipsqueak bursts into the clubhouse once again, saying that the school board rejected his proposal for the playground's new equipment, since there wasn't enough money in the budget. Diamond Tiara, seeing an opportunity, rushes towards the schoolhouse.

The Cutie Mark Crusaders follow Diamond Tiara, begging her not to go through with it, saying that she can be a better pony than she was before. Diamond Tiara appears to ignore all of their pleas, rushing to the schoolyard. There, Spoiled Rich is leaving the schoolhouse for a meeting, telling Diamond Tiara not to associate with blank flanks like the Crusaders. Diamond Tiara, however, stands up to her mother, saying that the Crusaders are her friends, and that whatever they get their special talents in, it will be amazing. She even makes her mother deliver a letter to her father, Filthy Rich, to have him donate money for the new playground equipment.

As the new equipment arrives, Diamond Tiara reveals that her special talent is to get others to do what she wants, but until the Crusaders decided to befriend her, she didn't understand how to properly apply it. She coordinates her fellow classmates to clean up and repair the area and then set up the equipment.

After the new playground is up, Apple Bloom confides in Sweetie Belle and Scootaloo that they always bomb miserably at trying for their own cutie marks, but never have any trouble helping others find their talents. So, instead of trying for their own marks, the three fillies resolve to make it their mission to help others. As the three clap hooves, they're surrounded by a sudden light, floating into the air with a bright flash. When the three come down to the ground, the Crusaders discover they gained their cutie marks, their special talents finally revealed. Their sisters all congratulate them and tell them how proud they are as the Crusaders get their own cuteceñeara. At the end, the Crusaders pose for a picture with their friends, sent in a letter to Princess Celestia and Princess Luna, the Cutie Mark Crusaders at the forefront.