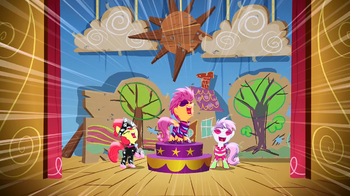 After fixing up Applejack's old tree house to use as a clubhouse, the Cutie Mark Crusaders go through a typical day of trying anything and everything to find their passion in life and earn their cutie marks. It ends in the usual string of failures, but then the fillies learn that the school is holding a talent show. They decide to put together an act, hoping that will lead to them earning their cutie marks.

Things go badly when the girls branch out from what they know they're good at and do what they want (but are no good at) instead: Apple Bloom, who's good at fixing things but feels that's too mundane, develops choreography with some badly-incorporated karate moves. Sweetie Belle, who has an ear for music and a wonderful singing voice but is prone to stage fright, makes the costumes and sets, resulting in a mess. Finally, Scootaloo, a great dancer and acrobat who wants to sing in a rock band, writes the music and lyrics, resulting in a wreck of Painful Rhymes:

When the night of the talent show finally arrives, the Cutie Mark Crusaders put out a very enthusiastic and ambitious (but also very bad) Hair Metal performance, with off-beat singing, clumsy dancing and collapsing props that leads to them getting laughed off stage. There's at least one bright spot in all this: the girls manage to win an award...for best comedy act.