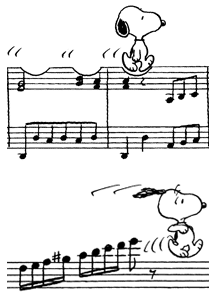 "He was playing music... while I did stuff!"
— Francis, Malcolm in the Middle
Advertisement:

Scoring a segment such that the music punctuates the physical motions occurring. This is a technical term coined in the animation industry in the 1930s, though the practice of synchronizing actions to the rhythm of the music goes to the days of silent film.

In a slapstick cartoon, this can be used as a complete substitute for the normal sound effects. In live action this is more commonly used alongside the normal sound effects, making it seem like a choreographed dance. In either case the effect is usually comedic, whether this was intentional or not, which is why the term is often used as a pejorative in film scoring circles.

While it was prevalent in the early days of sound cartoons due to how efficient it was for the animators to time the animation to, it soon became derided as cliché and corny, and its usage decreased considerably in the following years. That said, it's certainly not a Discredited Trope — there are still some modern cartoonists who still use this, such as Genndy Tartakovsky (who loves timing his cartoons to tempos) and Danny Antonucci. Feature animated films still make some use of it, but it's limited to musical sequences, like the ones seen in Rio.

For video games where the player can cause Mickey Mousing, see Musical Gameplay.

This is not the same as a Leitmotif, which is a particular theme tied to a character, object, or idea. It is also not the same as the use of music to express emotions. It only counts as Mickey Mousing if the music is timed to — and usually similar in contour to — the actions on screen.