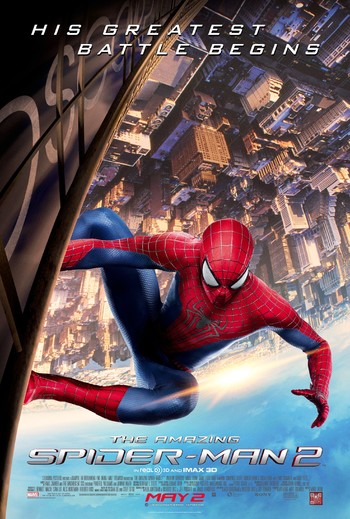 Months after the Lizard's attack on Manhattan, life seems to be going well for Peter Parker - he's graduated at the top of his class, he has a happy romantic relationship with Gwen Stacy (Emma Stone), and still has time to help the police deal with crime running rampant in the city. Things take an unexpected turn, however, when Oscorp technician Max Dillon (Jamie Foxx) gets into an accident that transforms him into an electricity-powered freak of nature that quickly becomes Spider-Man's most powerful opponent yet.

In addition, there's the matter of the unexpected return of Peter's old friend, Harry Osborn (Dane DeHaan), who has an infatuation with the web-slinger and is slated to take control of Oscorp as his father Norman (Chris Cooper) becomes increasingly ill. Unfortunately, Peter learns a truth about his parents that will test his friendship with Harry and transform the world around him as he is posed to fight his greatest battle.

The film also stars Sally Field as Peter's Aunt May, Felicity Jones as Felicia Hardy and Paul Giamatti as Aleksei Sytsevich/Rhino. It was released on May 2, 2014 in the United States, but interestingly opened in several international markets weeks before that date.

The movie was envisioned as a launchpad for a Shared Universe of Spider-Man characters that would compete with the Marvel Cinematic Universe. After the film came below Sony's financial expectations and there were multiple behind-the-scenes issues with the further development of the planned franchise, Sony instead signed a deal that allowed Spider-Man to appear in the MCU, via another reboot. Tom Holland appears as Peter Parker in Captain America: Civil War and from there stars in his own trilogy, with appearances in Avengers: Infinity War and Avengers: Endgame.

Jamie Foxx reprises his role as Electro in Spider-Man: No Way Home.

Some of the proposed spin-off ideas were repurposed for Sony's Spider-Man Universe, a cinematic universe adjacent to the MCU.

As was the case with the first movie, Beenox made the video game adaptation.

The Amazing Spider-Man 2 contains examples of: