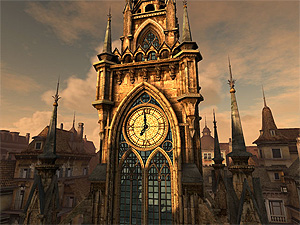 A giant timepiece, visible throughout its locale. Beloved of hunchbacks, of villains who need their capes to billow dramatically, and of snipers with poor tactical sense. Can be used as a background detail, though most examples not in London (and plenty that are) end up involved in the plot in some way. One may be used to increase the suspense in a Race Against the Clock, act as the home or base for the main characters, or become the stage for a Fight Scene or Climbing Climax.

Scenes on a Clock Tower often include:

The Palace of Westminster Clock Tower (now the Elizabeth Tower) shows up the most of any real tower; it is more often referred to as Big Ben, the nickname of its main bell (it has five).

This trope is extremely prevalent in Real Life. Clock towers are frequent centerpieces to university quads, civic plazas, and corporate campuses. Used mostly for aesthetic appeal in modern times. Please list only the famous ones under the Real Life section.

Aka Cathedral Climax, a subtrope of Climbing Climax. If someone climbs up one of these with a weapon in real life, duck. See also For Doom the Bell Tolls.

Not to be confused with the video game series Clock Tower or the magazine The Watchtower.