Landmarking the Hidden Base 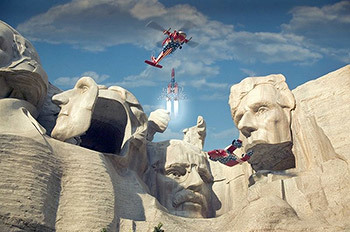 Who would hide a secret base inside Mount Rushmore? Real Americans, that's who.
Advertisement:

A hidden base would probably be best hidden in some bland ubiquitous building or under some random field or street. After all, bases would be easier for the enemy to find if you give them easy points of reference.

However in fiction that simply isn't dramatic enough, not only does your Evil Tower of Ominousness gain Evil Brownie Points for being cool and domineering, it also gains them if it is actually a well known Real Life landmark you've taken over. An Elaborate Underground Base also gains kudos for being underneath, or very close to, somewhere with which viewers will be familiar. This actually goes both ways as heroes seem just as prone to settling in such a location as villains are.

Mount Rushmore is an oddly popular location; perhaps because it's easy to imagine those presidential heads not being made up of solid rock but instead holding masses of secret rooms inside. It must get awfully crowded in there.

Note this trope does not cover bases in or under fictitious landmarks like Fantastic Four's Baxter Building or "almost" landmarks like "The Jeffersonian Institute" in Bones. It also does not cover a fictional agency openly using a landmark as their base, such as UNIT operating out of the UN building in Doctor Who.

Of course this makes a Monumental Battle all the more likely to happen if and when the series has the base attacked.

Also see Weaponized Landmark, where the landmark shoots back; and Alternate Landmark History, for when there's something else unusual about the landmark.