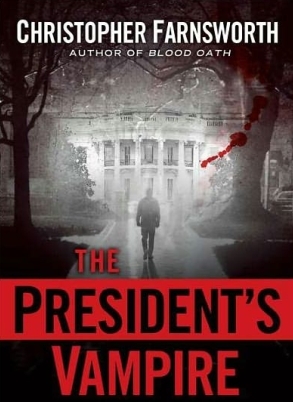 It's easy to keep secrets when nobody gives a damn.
Advertisement:

President's Vampire, also known as Blood Oath after the first book, is a series of novels by Christopher Farnsworth mixing supernatural horror and spy fiction.

Zachary Barrows is a young White House bureaucrat and his party's boy wonder, hoping to achieve much in politics. However, his career comes to a screeching halt when, after getting caught spending a night with the president's daughter, he's reassigned to be, for the rest of his life, a liaison officer between the White House and... a vampire.

As it turns out, there is an entire world of supernatural creatures that, for most part, consider humans to be a tasty and healthy meal, and many people who want to use black magic against the general public. Between them and unknowing civilians stands Nathaniel Cade, a vampire bound by a blood oath to serve the President of the United States, whoever he might be. He's been doing this job for over fourteen decades and gone through dozens of partners - the latest of which is supposed to be Zach.

Almost immediately after their first meeting, the duo is sent to save the America from Muslim terrorists who want to use Frankenstein monsters to overthrow the US, the original Doctor Frankenstein and the secret semi-government agency who had its own plans, and that's only Zach's first day on the job...

So far, there are five books in the series:

Tropes in this series are: