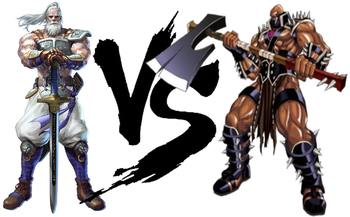 In certain stories, especially epic fantasy, there is a correlation between the weapon style characters or groups use, and how they are portrayed in the work.

The rules change when a Zombie Apocalypse is part of the plot, naturally. In such a desperate situation, any weapon is a good weapon.

Villain armies typically have more oddly-shaped weapons, weapons with spikes, etc. While not a hard-and-fast rule (see the exception for hammers, below) blunt weapons, especially ridged maces, tend to be evil, possibly due to their lethal practicality, as a crushed shoulder, knee, or skull tends to be more complicated to heal than a clean cut.

An easy way to tell which Mook is just a Mook, is to look at their weapons: light blaster rifle, polearm? Standard Mook. Massive sword or really scary-looking gun? This is at least an Elite Mook, if not a member of the Quirky Miniboss Squad. Weapon that looks suspiciously like the hero's? Uh, oh...

Truth in Television to some extent: The Geneva Convention frowns on the use of certain weapons and certain kinds of melee weapons (such as knives with odd-shaped blades) that do not leave clean wounds.