"Listen up everybody! Don't fall behind the Southern Cross!" 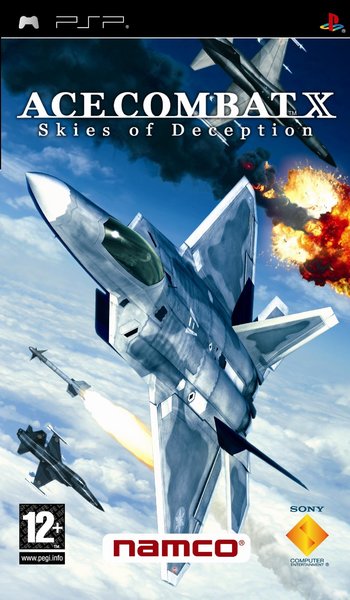 Skies of Deception is the first game in the Ace Combat series on the Playstation Portable and the ninth game in the series overall. Released in 2006. It focuses on the southern section of the Osean Continent where you play as a pilot in the air force of the Federal Republic of Aurelia. In 2020, they are invaded by their northern neighbor, the Democratic Republic of Leasath, on the pretext of retaliation for their involvement in a civil war. In just ten days their superweapon, the Gleipnir aerial fortress, wipes out almost the entire Aurelian air force. Gryphus One is the only survivor of his squadron and must lead the counterattack into Leasath territory.

It, along with the next PSP Ace Combat game, was the second (and third, respectively) game in the series that was developed by a different developer (Access Games, although Project Aces assist in the development).

The game brought a few new gimmicks into the series. The first was its campaign structure, where missions were chosen freely from a list of around 5 and could be done in any order, or not at all in some cases. The second was equippable parts that would boost certain characteristics of the chosen plane, often at a price. Albert Genette, the reporter from The Unsung War, returns to narrate the story of Gryphus Squadron.