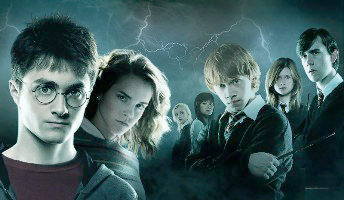 Left to right: Harry Potter, Hermione Granger, Luna Lovegood, Cho Chang, Ron Weasley, Ginny Weasley, and Neville Longbottom.
Hagrid: Of course you know all about Hogwarts.
Harry: Sorry, no.
Hagrid: No? Blimey, Harry, didn't you ever wonder where your mum and dad learned it all?
Harry: Learned what?
Hagrid: You're a wizard, Harry.
—Harry Potter and the Philosopher's Stone (2001)

Starting in 2001 and finishing in 2011, each of the seven main Harry Potter books was put to film. The films star Daniel Radcliffe as Harry, Rupert Grint as Ron Weasley, and Emma Watson as Hermione Granger. The entire series (which had taken a higher aggregate box-office gross than any other film series until being overtaken by the Marvel Cinematic Universe) spans eight movies.

The films vary greatly in tone and style, as pretty much everything except the main cast was changed at least once over the decade-long process of making the films - the director, the screenwriter, the score, the sets, the costumes, the lighting and visual effects, the actor who played the villain, the maturity of the child actors, and the level of deviation from the books. The Harry Potter fandom is rather sharply divided over whether the earlier or later films are better. It basically comes down to personal opinion, whether one prefers complete fidelity, point-for-point with the books, or a more cinematic approach that cuts and embellishes as the directors see fit.

The later films tend to be more controversial among fans, due to being more different to the books. This resulted in a film series riddled with Adaptation Explanation Extrication, Adaptation Induced Plothole, and Big-Lipped Alligator Moment, so the plot is sometimes incomprehensible to anyone who hasn't read the books. Many fans were also upset that the focus on the main character's journey resulted in considerable Flanderization of other characters including even Ron and Hermione. On the other hand, the scenes which did make the cut were mostly well-received, and some cuts were inevitable considering the Door Stopper length of the later books.

The first two films, directed by Chris Columbus, place more emphasis on plot than characterization and are generally regarded as solid but workmanlike, with most scenes being near-identical to their book counterparts except for some added magical action scenes. Columbus was succeeded by Alfonso Cuarón who decided to reverse that emphasis, creating what is likely the most controversial movie in the series. His Prisoner of Azkaban is either an artistic triumph or a lot of wangsting which fails to explain its own plot (or both). Mike Newell came next, following more-or-less in Cuarón's footsteps, but with a larger eye for spectacle and adventure, though it received attention mostly for how much stuff got left out.

British TV director David Yates followed, helming Order of the Phoenix and all subsequent films, combining the Cuarón and Newell approaches in terms of style, while emphasizing the increasingly dark and grim tone of the later novels. The sixth film, Half-Blood Prince, downplayed the flashbacks and textbook reading that comprised much of the book, instead focusing on the more cinematic present-day events. The seventh book, Deathly Hallows, was split into two separate films in an attempt to encompass as much of the final book's content as possible, which may be viewed as an overdue return to the pacing of the earlier films or a Cash Cow Franchise dragging out a story with an unnecessarily slow-paced beginning (or both).

The first five films were made and released as the final three books were being written. The film of Philosopher's Stone came out a year after the book Goblet of Fire was published. The final book in the series, Deathly Hallows, was published one week after the film Order of the Phoenix was released in theaters.

announced that they were developing a new spin-off movie series set in the Harry Potter universe, Fantastic Beasts, initially based on the defictionalized book Fantastic Beasts and Where to Find Them. The first two films are written by Rowling alone but Steve Kloves (who wrote all of these other than Order of the Phoenix) is given credit as a co-writer on the upcoming untitled third installment. The series starts in 1926, sixty-five years before Harry stepped foot in Hogwarts and its protagonist is famed Magizoologist/scribe of the textbook, Newt Scamander.

Tropes that apply to the films in general:

Alastor 'Mad-Eye' Moody demonstrates to the students the three Unforgivable Curses: Imperio (the Imperius Curse), Crucio (the Cruciatus Curse), and Avada Kedavra (the Killing Curse). These three spells are known as such for being the most powerful and sinister spells known to the wizarding world, and their usage on another human being would often warrant a life sentence to Azkaban.

Alastor 'Mad-Eye' Moody demonstrates to the students the three Unforgivable Curses: Imperio (the Imperius Curse), Crucio (the Cruciatus Curse), and Avada Kedavra (the Killing Curse). These three spells are known as such for being the most powerful and sinister spells known to the wizarding world, and their usage on another human being would often warrant a life sentence to Azkaban.