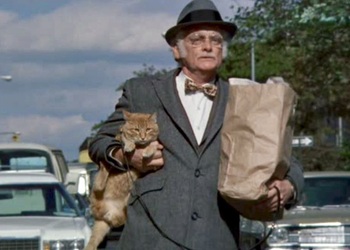 Harry and Tonto is a 1974 American Dramedy Road Movie directed and co-written by Paul Mazursky.

Septuagenarian widower and retired teacher Harry Coombes (Art Carney) finds himself evicted from his New York City apartment so the building can be demolished. Joined by his cat Tonto, he moves in with his son Burt (Phil Bruns) but quickly gets fed up with Burt's dysfunctional family and decides to fly to Chicago to see his daughter Shirley (Ellen Burstyn). But after a series of mishaps, he ends up buying a used car and driving to Chicago instead. Along the way he's joined by teenage runaway hitchhiker Ginger (Melanie Mayron). He ultimately decides to travel to Los Angeles to visit his other son Eddie (Larry Hagman), but the American road presents Harry with plenty of colorful characters and situations along the way, as Tonto stays faithfully by his side.

Most famous now for Carney's upset win of the Best Actor Academy Award, for which he managed to beat out Jack Nicholson (Chinatown), Al Pacino (The Godfather Part II), Dustin Hoffman (Lenny), and Albert Finney (Murder on the Orient Express).