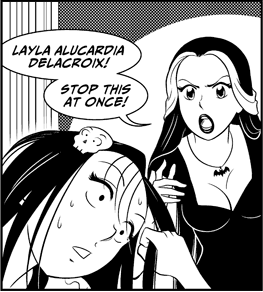 In sitcoms, you can tell a parent, usually the mother, or an older guardian figure, is really mad at their kid when they call for them by their full name. Often serves as a good way of telling the audience the character's full name right away. If they just use first and last name, it's not as big an issue, but if the middle name is included, look out! In fact, you can gauge the amount of trouble you're in by the number of middle names used. And while it may seem intimidating to have one's full name yelled by a parent, the time you REALLY know you're in trouble is when they don't shout it, but instead say it in a soft, (barely) restrained voice.

This frequently happens when said parent finds out about the Zany Scheme the kids have been cooking up behind his or her back, either before or after the scheme has been attempted. In this case, it's usually followed by something like, "What are you up to this time?"

May be further accentuated by using true pronunciation if the name is non-English in origin; for instance, if your family is French, hearing your full name pronounced in proper French probably means big trouble. This is most commonly used by parents who are first or second-generation immigrants.

Can also be used on any guy by his annoyed or angry significant other, be it wife, fiancée, or girlfriend. For added punch, it can also be said With! Emphasis! On! Each! Word! OF THE NAME!

This trope isn't as common as it is for no reason; as almost anyone can attest to, it's Truth in Television on a massive scale.

A milder version involves a character's full first name being used when they're more commonly known by a diminutive form or a nickname. For example, calling Chris by her full name "Christina". Interestingly enough, a character who goes by their first name might experience the opposite by being called by their name's conventional pet form. This is more of an Embarrassing Nickname being invoked.

This trope may be the practical origin of I Know Your True Name; calling someone by their full name indicates intimate knowledge of that person, which can be used to exert power over them.

This only works if the person it is being used on isn't used to being called by their whole name, thus those on a Full-Name Basis won't feel as much of an effect, since they're always called that anyways.

Oh, Crap! is a common reaction to having your name called out this way. But you already knew that.

Compare First-Name Ultimatum. Occasionally used to expose an Embarrassing Middle Name. A subtrope of You Called Me "X"; It Must Be Serious. If a character is announcing their own name, it's likely My Name Is Inigo Montoya. Will sometimes overlap with Given Name Reveal.

When Blu is refusing to take his vitamins, Linda reveals that Blu is apparently not actually his first name.

When Blu is refusing to take his vitamins, Linda reveals that Blu is apparently not actually his first name.