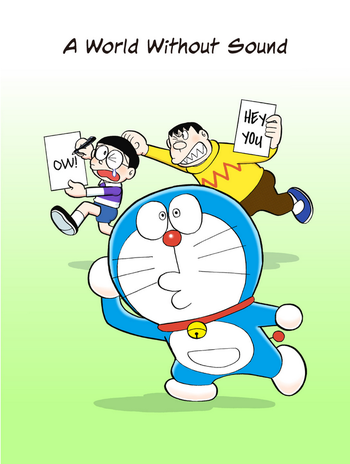 Doraemon opens the window to catch the breeze outside, but Noby shuts it upon hearing Big G's horrible singing. Noby tells Doraemon that he'll be have to go to Big G's concert. On the day of the concert, Noby and his friends are nervous about listening to Big G. Doraemon pulls out the "What if?" Box. Noby asks it what the world would be like if there was no sound, hoping to avoid hearing Big G.

When Doraemon and Noby enter the world without sound, they realize they have to write on paper to communicate. Noby takes a nap, thinking that there won't be any noise to bother him. Tammy pesters Noby to get up, study, and learn to read.

Noby walks outside to enjoy the outdoors. Noby almost gets hit by a car that he doesn't hear. He angers Mr. S due to his poor communication and handwriting skills. Noby begins to realize that life isn't as easy as he thought, and he plans to go back home after the concert.

Noby and Sue go to the concert, thinking that they'll be okay if they can't hear Big G. When the concert begins, Big G writes out his lyrics for everyone to read. The lyrics alone are enough to make everyone sick. Noby takes off his glasses so that he can't read the lyrics, but Big G catches him. Big G punches Noby as they run off into the distance.

Despite being one of the earliest chapters, this story has never received an Animated Adaptation for unexplained reasons. Some people think that it wouldn't gain anything from being animated. Animation is drawings put to sound, so if there's no sound, there's no point in animation.