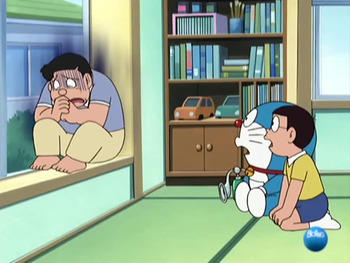 "I'm such a horrible person, I'm not even able to resist smoking a cigarette! I promise I'll never smoke again!"
Advertisement:

Big G draws graffiti on the wall and calls it "art". Noby tells Big G that people will be mad at him, but Big G doesn't believe him. Big G notices Mr. Rumbleton walking by, so he gives his chalk to Noby and escapes. Mr. Rumbleton thinks Noby drew the graffiti, and Noby can't convince him otherwise. Noby is forced to clean the wall.

Noby explains his problems to Doraemon. Doraemon shows Noby the Soap Bubble Straw. It's not a straw, but a pipe that blows soap bubbles. When the bubbles touch someone who has done something wrong, they realize that they've made bad choices and try to make up for them. Toby comes in Noby's room and smokes. Noby blows soap bubbles at Toby and causes him to cry and promise he'll never smoke again. Toby tells Noby to never grow up like him. Doraemon explains that the gadget's effects quickly wear off.

Big G looks over the store. He's mad when he sees Noby and Doraemon hiding. Noby blows the Soap Bubble Straw, but it doesn't work. After he blows many bubbles, he finally gets Big G to feel sorry. Big G regrets blaming Noby for his graffiti and asks Noby to forgive him. Big G wants Noby to hit him, but he refuses. Big G hits himself with a frying pan instead. He sees his mom. He explains his "criminal" misdeeds to her and runs away. Doraemon says that Big G might have the effect for longer.

Noby says he'll use the gadget on his own. Doraemon doesn't trust him to use it properly. Noby blows a soap bubble at him and Doraemon admits that he should've trusted him from the beginning. Doraemon allows Noby to use the Soap Bubble Straw for whatever he wants.

Noby looks for someone who has been misbehaving. He sees Sue and her friends. Sue's friends have drawn with markers all over Sue's dog's face. Noby blows bubbles at Sue's friends to force them to feel sorry.

Big G bumps into Sneech while still under the effects of the Soap Bubble Straw. Sneech apologizes for bumping into Big G, but Big G tears up and says he's sorry for walking without looking. Sneech thinks Big G is acting strange. Sneech says Big G did nothing wrong, but Big G still apologizes. Sneech says he's more concerned about Big G taking his comics and his toys, forcing him to be in the store with him, and forcing him to hear his bad singing. Big G feels sorry for being mean. The effect wears off, but Sneech still tries to get Big G to apologize for his other bad habits. Big G beats up Sneech after he feels normal again.

Noby runs into his teacher, Mr. S. Mr. S asks him if he has finished his work. Noby says he hasn't finished it, but he has no excuse as to why. Mr. S tells him that he shouldn't be walking around outside until he has finished his work. He says that no matter how many times he tells Noby to study, he never does. Noby blows a soap bubble at Mr. S and makes him feel sad. Mr. S says that he doesn't understand Noby and his problems. Mr. S says that he shouldn't even be a teacher at all.

Right when Mr. S leaves, Doraemon comes in and tells Noby he's misusing the gadget. Doraemon asks for the gadget back, but Noby still wants to use it. Noby tries to use the Soap Bubble Straw to make Doraemon regretful, but Doraemon uses a blanket to dodge all of Noby's soap bubbles.

Tammy meets Mr. S. Mr. S says it's all his fault that Noby doesn't get good grades, even though Tammy knows that it's Noby's fault. Tammy runs to see Noby.

Noby blows a huge bubble. Doraemon reflects it and it accidentally hits Tammy. Tammy feels so upset that she runs all the way home. She asks Toby to forgive her for everything she's done to the family. She tries to punish herself by shaving her head, but Doraemon, Noby, and Toby prevent her from doing it.

This episode has never been released on home video in Japan, but it can still be watched in other languages, such as Spanish.