Smoking Is Not Cool 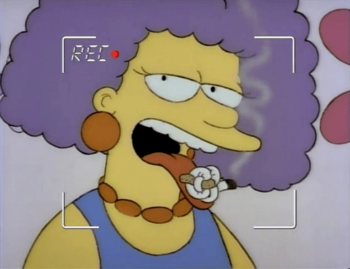 "Ugh! Back to the Loch with you, Nessie!"
Luis: Okay, I just have one very important question: you got a smoke?
Leon: Got gum.
— Resident Evil 4
Advertisement:

You think that Smoking Is Cool, don't you? That smoking will always automatically make you a badass?

Not necessarily. Plenty of characters are perfectly capable of being tough or cool without lighting up. In fact, to emphasize this point even further, characters can be made more unlikeable or unattractive by having them smoke. This can happen by having them taunt a non-smoker into lighting up, because otherwise he's a "wimp." Or by blowing Second-Face Smoke in his face. Or just by having an ugly, obese, badly dressed, lazy, or otherwise degrading character light up a cigarette or a cigar. Or just out and out try to Scare 'Em Straight, by having the smoker display all the negative symptoms of life-long smoking: respiratory problems, bad skin, yellowing teeth, and maybe even cancer, even if the person in question couldn't realistically have been a smoker for long enough for these problems to occur.

Truth in Television, since tobacco smoke really smells repulsive when you're a non-smoker. Also, smoke coming out of someone's mouth can really account as a Gross-Up Close-Up when you really look at it. And, more seriously, exposure to secondhand smoke can be seriously detrimental to infants, children, and anyone with even a slightly dodgy respiratory system (e.g. asthmatics).

See also Do Not Do This Cool Thing and Good Smoking, Evil Smoking. Sub-trope of Drugs Are Bad.