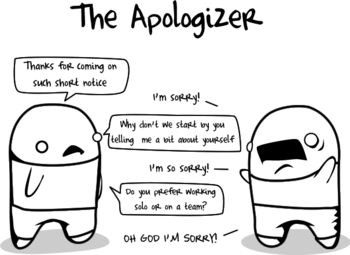 I'm sorry! I can't think of a better caption for this image!

"The thing with an apology is that it's something precious, like diamonds. If it happens once in a while, it's meaningful. If it only rarely happens, it can be a surprise. But if it happens too much, it loses its value, and thus loses its impact."
— Mackenzie DeBruin
Advertisement:

Wait, are we describing Apologizes A Lot Here already? Ahh, oh no!! I'm so sorry, I'll get started!

Alright, this trope is about a character who apologizes a lot. When called on it, may actually apologize for being so apologetic, leading to a common gag where they apologize when asked to stop apologizing so much. Often a trait of a Cute Clumsy Girl and not out of place on a Shrinking Violet. Often comes with Self-Deprecation. Some Apologetic Attackers do this, some only apologize once or twice. Sorry I Fell on Your Fist is an extreme example. Sometimes associated with Canada, Eh? types.

Can also be a trait of real people.note Wait, I didn't mean to imply that Canadians aren't real people! Oh God, will you find it in your hearts to forgive me? In some cases, can be a warning sign that someone is a victim of abuse. For the trope's opposite, see The Unapologetic.

Sorry, was that okay??

Sorry, sorry! Thank you for waiting! I'm here with the examples!:

Is Mark Half Canadian?

Never knew how many times Mark said "sorry" till Honest Trailers pointed it out.

Is Mark Half Canadian?

Never knew how many times Mark said "sorry" till Honest Trailers pointed it out.