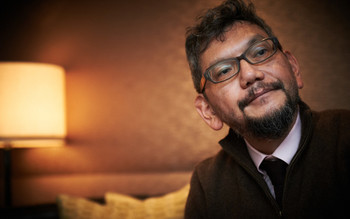 "I'm here to answer any questions you have".

Hideaki Anno (庵野 秀明Romaji anno hideaki) (born May 22, 1960) is a Japanese animator and actor who is one of the seven co-founders of Studio Gainax. He is also the man behind the Neon Genesis Evangelion franchise, and he was rather famously involved in a dispute over the anime adaptation of His and Her Circumstances with the author of the manga, Masami Tsuda. Born in Ube, Anno made a name for himself working as an animator on Nausicaä of the Valley of the Wind — thanks to recognition from since-then friend, mentor, and collaborator Hayao Miyazaki note In case you noticed anything in Nausicaa that could have possibly influenced Evangelion, yes, he did animate the scene with the Giant Warrior. His most high-profile work prior to Evangelion was for Nadia: The Secret of Blue Water as well as his directorial debut, Gunbuster. Since the 1998 release of Love & Pop, Anno has also directed several live-action films, including an adaptation of popular 1970s anime Cutey Honey and Toho's 2016 Godzilla film, Shin Godzilla. In addition, he also designed the intro sequence for Space Battleship Yamato 2199.

Anno once went back to his hometown to teach kids about working in animation. Video here.

Any physical or mental resemblance to a certain Jerkass Father (Gendo Ikari) is entirely coincidental, though the one to his son probably isn't.note According to his friend Kunihiko Ikuhara, Shinji and Kaworu were most definitely based on Anno and him. Take that as you will, though Ikuni being himself, it is probably better to prepare a mountain of salt.

He is also a master of the Shrug of God.

Spike Spencer hates him immensely for running out of ink during the ending of Neon Genesis Evangelion.

Kazuya Tsurumaki is his protege and successor, while Hayao Miyazaki is a friend and teacher.

He starred in the 2013 Hayao Miyazaki film The Wind Rises as the voice of the male lead, a fictionalized version of Mitsubishi aircraft designer Jiro Horikoshi. Miyazaki even coached him through how to act

A fictionalized version of him in college serves as The Rival in Shimamoto Kazuhiko's semi-autobiographical manga Blue Blazes (Aoi Honoo) as well as its 2014 live-action television adaptation, where he is played by Ken Yasuda.

For other Japanese creators with a penchant for dark and sobering plots, see Gen Urobuchi and Lynn Okamoto.