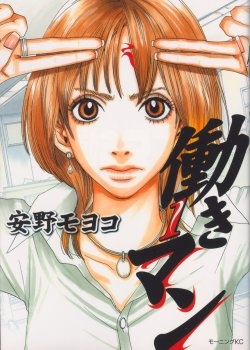 Hataraki Man is a story about Matsukata Hiroko, a 28-year-old single woman who is an editor of Weekly Magazine, JIDAI. She’s often at odds with Tanaka Kunio, a novice editor. Her work already stresses her out and he’s unapologetic about his own mistakes! Everyone refers to Hiroko as a masculine woman for how seriously she takes her work. She smokes too much, works too much, and never has sex. However, when it’s time to get a story done, she switches into “Working Man” mode where the testosterone in her blood increases, she works three times her normal speed, and all thoughts of life’s necessities disappear. (Source: Entropy)

Written by Moyoco Anno of Sugar Sugar Rune fame, it was adapted into an 11 episodes anime in 2006 that aired in the noitaminA slot and a live-action drama in 2007.