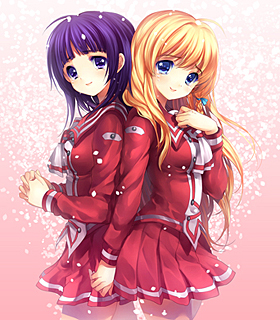 The story revolves around Ryou, an Ordinary High-School Student, and his two best friends Claire and Rina, living in Trident City in Sorayama. It starts out in a classic Love Triangle scenario: Ryou likes Claire while Rina has feelings for Ryou; however they still manage to hang out together as usual friends would.

The story involves Ryou doing anything he can to help his friends. He learns that Claire's new boyfriend is potentially verbally abusing her while Rina's behaviour becomes increasingly evasive, which leads Ryou to wonder what Rina is keeping from them. Through interactions with other characters, Ryou can gain more insight into not only his friends but other happenings in the city as well.

All the while this is going on Ryou has been having dreams/visions of a past life as a prince with magical powers, living in a kingdom where magic exists and is used from everyday tasks to tournaments. The first scenario is a vision of the prince surrounded by his ex-servants, clutching to himself a sword passed down from his family for generations. Ryou eventually gains magical powers of his own and not only wonders what he should do with his newfound skills but how he should regard Mystica, a Magical Girl Warrior who constantly reminds Ryou of his priorities.

In 2014 Fading Hearts was released on Steam.