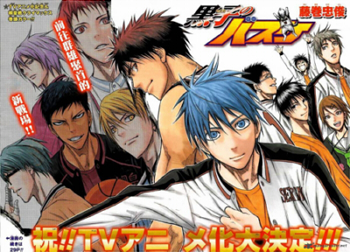 Teikou Middle School Basketball Club. A super strong school with more than 100 club members, boasting several successive championship wins. But even within that glorious history, there is still a team that can without fail be called the "strongest"—a generation of five players with talents that you would see once every ten years called the "Generation of Miracles." But there was a strange rumor that there was still one person the five geniuses acknowledged as superior...
Advertisement:

Kuroko's Basketball (Kuroko no Basuke) is a sports manga by Fujimaki Tadatoshi, which ran from 2008 to 2014 in Weekly Shonen Jump. It chronicles the high school adventures of Kuroko Tetsuya who, despite having been a regular player on the famed Generation of Miracles team, cannot dribble, fails at shooting, has low stamina, and often goes completely unnoticed while on the basketball court. Needless to say, when Kagami Taiga, the other protagonist of the story who has come back bored from American basketball standards, plays Kuroko, he easily wins. With that effortless victory, he advises the other to stop playing basketball forever, noting that talent and skill are more important than passion at times.

Kuroko, in response, demonstrates to Kagami—and the rest of the Seirin High basketball team—that his unique talent from the Generation of Miracles is his ability to quickly relay passes based on his lack of presence on the court. He makes it onto the Seirin regulars as a result and gains an ounce of Kagami's respect in the process. Kuroko's goal in his high school years is to defeat all the members of the Generation of Miracles, using his limited presence (as a Shadow) to help Kagami (as a Light) achieve greatness.

Of course, the Generation of Miracles (who have all gone their separate ways after middle school) do not take Kuroko and Kagami's challenge seriously—in fact, they do not take Seirin seriously, as its basketball club is only a year old and its team used to be comprised entirely of freshmen. Along the way in the manga, Kuroko and Kagami meet - and subsequently defeat (or are defeated by)—other members of the Generation of Miracles who, on a whole, have grown apathetic towards the sport as they believe themselves to be too good for defeat. Kuroko’s Basketball is a good example of the shonen genre, especially for sports, in that there are extended training montages, ridiculous skills on-and-off-court (even by manga and anime standards), and a decent mix of humor, friendship, action, and drama. The romance, on that note, is minimal at best, and generally played for laughs.

After the end of the series, Tadatoshi wrote a sequel manga— Kuroko’s Basketball: Extra Game, which follows the characters after Kuroko's second Inter-high.

An anime adaptation by Production I.G aired in the Spring 2012 Anime season. A second season was released on October 2013, with a third premiering in January 2015. The series also received a series of compilation films, and a wrap-up movie, Kuroko’s Basketball: Last Game, which adapts Extra Game and the match against Jabberwock in May 2017. Despite the anime's popularity, it wasn't until 2020 that the SAG-AFTRA database revealed that an English dub would be produced by Bang Zoom! Entertainment (under their pseudonym Unforeseen Productions Inc). A couple of months later, it was announced that the first season would be released on Netflix on January 15, 2021.

The franchise also had a series of stage play adaptations, beginning in 2016. The fourth and final play, Ultimate Blaze, was performed in 2019.

After the series finished up, Tasaoshi went on to write another Shonen Jump sports manga, Robot × Laserbeam, but centering around golf rather than a more aggressive sport.

Now has a character page. Please move any character tropes there.