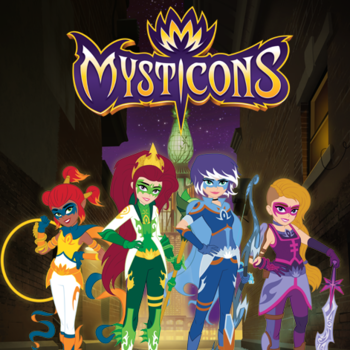 "We are the warriors standing up at evil's door!
We are the ones who fight for the fate of the world!
We are the Mysticons!"note The Mysticons from left to right: Piper Willowbrook, Arkayna Goodfey, Zarya Moonwolf, and Emerald Goldenbraid.
"When honor calls, we are one for all, and all for one
Remaining brave and strong until the battle's done!"
Advertisement:

Mysticons is a female-oriented Canadian/American animated Fantasy/Magical Girl series that premiered on August 28, 2017 on Nickelodeon in the United States and YTV in Canada. Created by Sean Jara, the show is a collaborative production between Canada's Nelvana and the American Topps Company, with Playmates Toys taking care of the merchandising elements of the show.

One thousand years ago in the realm of Gemina, legendary warriors called the Mysticons were brought together by the mighty Dragon Disk and defeated the evil Queen Necrafa and her army of undead. In the present, Gemina has changed, becoming a Magitek world where modernized skyscrapers and futuristic technology mingle with magical beings and ancient sorcery. However, Necrafa's followers have survived and reorganized themselves as The Spectral Hand under the leadership of her general Baron Dreadbane, who launches an attack on the royal palace in Gemina's capital of Drake City in search of the Dragon Disk. In the chaos, the Dragon Disk reactivates for the first time in a millennium and creates the second generation of Mysticons from four teenage girls — the royal princess Arkayna Goodfey, a dwarf named Emerald Goldenbraid who works as a griffon handler for the royal family, an orphaned thief named Zarya Moonwolf who originally came to steal the Disk, and an elf named Piper Willowbrook who is Zarya's partner-in-crime.

With Arkayna's parents, the king and queen, having been turned to stone by Dreadbane, the four new Mysticons must undertake a quest to free them by acquiring the Codex, an arcane tome split in four pieces that requires the Dragon Disk to find and complete. These brave but young and inexperienced heroes will have to give everything they've got to achieve this goal, growing stronger as warriors all while fighting the Spectral Hand as Dreadbane and his followers seek to take the Codex and the Dragon Disk from the Mysticons in order to resurrect Queen Necrafa and unleash a new world order upon Gemina.

Mysticons ran for 40 episodes over two seasons, with the final episode airing on September 15, 2018. Despite its short time on the air, it was met with acclaim by critics, as well as many viewers, with some calling it Nelvana's best series since Detentionaire, up there with Franklin, Babar, and Redwall. Its popularity was enough to earn the show a comic book adaptation by Dark Horse Comics that was released in the summer of 2018, as well as a toyline and a few junior novel adaptations. There's also an official Youtube channel

Zarya and Piper get captured by an evil woman.

Zarya and Piper get captured by an evil woman.