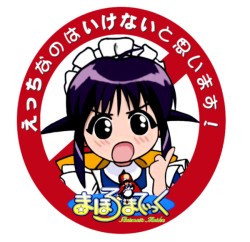 Mahoromatic is a Seinen manga originally written by Bunjūrō Nakayama and illustrated by Bow Ditama, which ran from 1998 to 2004 in Comic Gum. In 2001, it was adapted into an anime series produced by Studio Gainax and Shaft, and directed by Gainax co-founder Hiroyuki Yamaga.

The Earth has just thwarted one of those pesky alien invasions, thanks to the actions of the superpowered combat android Mahoro. As a reward, she is given the freedom to live the rest of her operational life (just over a year) however she chooses. Mahoro chooses to spend her days serving Suguru Misato, as a maid.

In the second season, Mahoromatic: Something More Beautiful, Mahoro is joined by her "little sister" who is a completely Terran Robot Girl Maid (and, initially, a failure). There are even the makings of a small harem with the male lead's schoolmates (though the feel is more of a close group of friends or True Companions rather than a true harem).

At its core, Mahoromatic is a comedy with strong dramatic (even tragic) elements. As a comedy, it offers several laugh-out-loud moments. In fact, its signature Catchphrase — "Dirty thoughts are bad!" — shows up in many variations on the net and in other anime. The ending in the anime version is much darker than in the manga. You have been warned.