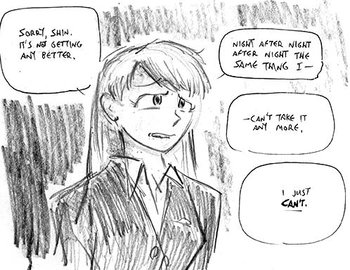 Aw, Asuka, don't lose hope. Things get better.
Art by Shadowjack
Shinji: But the Soryu women admire strength, [...] If you're weak, they expect you to rise above it. And if you're strong, they expect you to push harder in order to excel. The one thing they hate is people who give up, who run away. I'm the same way, I want nothing more than to run away, but I know I'll disappoint her if I do. So I don't. I keep trying, even if it hurts, because I know that will inspire her to do the same thing."
The other man stroked his chin. "Is that really worth it, though? That's a terrible burden to place upon yourself, and on her."
Shinji: Maybe it wouldn't be for some people, but it is for us. I guess it's up to you to decide, in the end.
Advertisement:

After the War and Third Impact, as the world is gradually recovering from Instrumentality, Shinji and Asuka face their next and greatest challenge: learn how to get along while they try to get over their many psychological issues. Eventually they have to learn how live together and take care of each other, mature, have a relationship, be functional adults, be parents... despite of their fading but never really gone PTSD.

Ghosts of Evangelion is a Neon Genesis Evangelion post-Third Impact Continuation fanfic written by Bagheera that narrates the lives of Shinji and Asuka after Instrumentality. While it may sound like most post-TI fics, several details set it apart: the story covers a very long period between the years 2016 and 2080 and the narration is non-linear, showing different stages of the evolution of Shinji and Asuka's relationship as they endure different trials and challenges; it pays slavishly detailed attention to canon and characterization; and it explores some issues and relationships that Evangelion fanfiction seldom delves into.

The story keeps Shinji and Asuka in-character and at the same time makes them to grow up and move forward, blending tender and tragic moments. Their relationship is difficult, troubled, and very complex; one of two very broken individuals who are largely co-dependent on each other, yet struggle to open up and bond due to mixed feelings and huge hang-ups.

The conclusion has already been published, but because of the non-linear nature of the fic, the author keeps adding new chapters whenever he pleases.

Fanart and commentary by ShadowJack can be read here

Compare and contrast with post-Third Impact and Alternate Universe Eva fanfics such like Advice and Trust, A Crown of Stars, HERZ, The Second Try, Children of an Elder God, Thousand Shinji and Neon Genesis Evangelion: Genocide.

open/close all folders
A-C
D-F
G-I
J-L
M-O
P-R
S-T
U-Z
Asuka: (growling) Get this straight, bird brain. I am the cause of, and the solution to, most of Shinji's problems. Of course I'll take care of him!