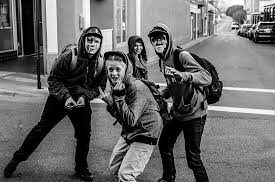 They're young and already on the streets causing trouble!
"Just barely out of school, came from the edge of town
Fought like a switchblade so no one could take him down
He had no money, no, no good at home
He walked the streets a soldier and he fought the world alone"
— Skid Row, "18 and Life"
Advertisement:

The formal adjective definition of the word "delinquent" describes something or someone who fails in their duty. This sums up its more popular usage quite nicely; a delinquent is someone (generally a young person) who fails in their "duty to society" by being anti-social. They won't be plotting to take over the world or rob banks and they're more likely to be an Asshole Victim of The Aggressive Drug Dealer than an example. They are, however, likely to refuse to turn up to school (or are disruptive if they do), harass people in the street, shoplift and drink or smoke while underage.

If the protagonist encounters them, they're probably going to either be bullied by them, or fall in with them. In the later case they'll serve as Toxic Friend Influence who use peer pressure to encourage the protagonist to join them in their misdeeds (naturally this "friendship" will be short lived, as the protagonist will be caught the moment they try it and subsequently be abandoned by them at best or made their scapegoat at worst). Alternatively, the trope can be played more lightly, with a delinquent acting as a sort of Token Evil Teammate, or as an outright Anti-Hero or Byronic Hero.

Delinquents have come in many flavors in different times and places, but the stereotype tends to attach itself to whatever scary new subculture the kids have come up with recently: greasers in 1950s America, mods and rockers in 1960s Britain, and punks everywhere since the 1970s.

This trope can overlap with Spoiled Brat, Preacher's Kid, or Lower-Class Lout (depending on their family background). Expect them to act as mooks or be the "hat" of a Gang of Hats.

Contrast the Tragic Dropout, who does drop out of school, but was well-behaved and got good grades while in school. This can be a Delinquent character's Start of Darkness, however, depending on just what was the cause.

For tropes and stereotypes about delinquents in Japan, see Japanese Delinquents. Please move the Anime and Manga examples to this page.