Film / They Made Me a Criminal 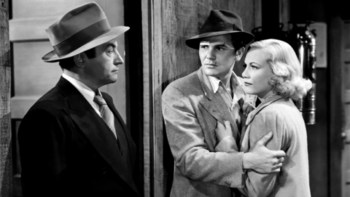 Phelan arrives and ruins everything.
Advertisement:

They Made Me a Criminal is a 1939 film starring John Garfield and Claude Rains.

Garfield plays Johnnie Bradfield, a rather sleazy champion boxer who projects an air of all-American wholesomeness while actually enjoying liquor and women. When Johnnie's rather unsavory habits are about to be exposed by a reporter, Johnnie's manager Doc confronts the reporter, and accidentally kills him. The manager and Johnnie's girlfriend Goldie then frame Johnnie for murder—and are promptly killed in a car wreck.

Left with no other alternative Johnnie goes on the lam. He drifts all the way to Arizona, where he finds refuge at the Rafferty farm, a date farm that also serves as a reformatory for delinquent teens. Inspired by the kids, Johnnie turns over a new leaf. But his past, in the form of Detective Monty Phelan (Rains), can't be escaped that easily.

One of the more dramatic cases of Genre Adultery on record, as this hard-bitten crime drama was directed by none other than Busby Berkeley, better known as the director and choreographer of elaborate, fantastical musical numbers in musical comedies like 42nd Street and Footlight Parade. Apparently Warner Bros. gave him the gig to keep him at the studio; if so it failed, as Berkeley left for Metro-Goldwyn-Mayer right after completing this film.

Not to be confused with the British Film Noir, They Made Me a Fugitive.