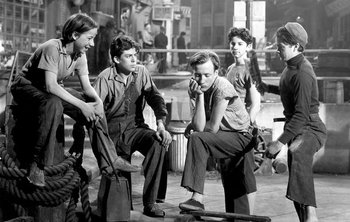 Dead End is a 1937 film directed by William Wyler, starring Joel McCrea, Sylvia Sidney, Humphrey Bogart, Claire Trevor, and the "Dead End Kids" in their film debut. It was adapted from Sidney Kingsley's 1935 Broadway play of the same name.

The setting is New York City, on the East River just south of the Queensborough Bridge. This area of the East Side is filled with grinding poverty, street gangs, and filthy, vermin-ridden tenements. However it also offers a nice view of the river, and gentrification was already a thing in 1937, so a fancy apartment building for the hoity-toity rich has been built directly abutting the slums. (As it turns out this setting is closely based on a Real Life area, namely, the end of 53rd Street and the ultra-luxurious River House

The poor people haven't been chased out of Manhattan yet, however. This particular neighborhood is home to the Dead End Kids, a gang of young hooligans who haven't quite yet graduated to serious crime. One of their number is Tommy, who is a bit more honorable than some of his buddies. His older sister Drina (Sidney) longs to escape the slums and wants to save Tommy from a life of crime. Drina also hopes for romance with Dave (McCrea), who grew up with her in the neighborhood and is struggling to make it as an architect. Unfortunately Dave is having an affair with Kay Burton, who is the mistress of one of the rich occupants of the apartment building. Further complicating matters is Hugh "Baby Face" Martin (Bogart), who also grew up in the neighborhood with Drina and Dave, but is now a gangster wanted for multiple murders. Hugh has snuck back into the neighborhood to visit his mother and his old girlfriend.

Bogart, still four years away from breaking out as a leading man with High Sierra, is billed third. The young actors who played the Dead End Kids would wind up appearing in 89 movies over 21 years, first as the "Dead End Kids" in six Warner Brothers crime dramas (including this film, Angels with Dirty Faces, and They Made Me a Criminal), then as the "Bowery Boys" in a series of Poverty Row B-Movies.

Not to be confused with the French horror film Dead End. It most definitely has no relation with the Dead End web cartoon.